The NHL: Kings of Due Diligence

Share All sharing options for: The NHL: Kings of Due Diligence 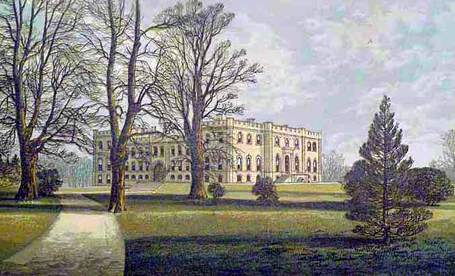 This is Kimbolton Castle.  Henry VIII's first wife, Catherine of Aragon, died here after refusing to consent to a divorce - events which continue to have importance worldwide, since if not for Henry's desire for a male heir the Church of England might never have seperated from the Catholic Church.

Angus Charles Drogo Montagu, the 12th Duke of Manchester, is an interesting and relatively unimportant figure in NHL history, and a substantially more important figure in the history of the Tampa Bay Lightning.  In June of 1991, Phil Esposito had to present a five-million dollar down payment to the NHL to secure the existence of the Lightning.  He had 2.5-million from a Japanese investor (Tak Kojima) and had expected his partner, David LeFevre, to come to the meeting with the rest of the money.  The only problem was that LeFevre was nowhere to be found.

Meanwhile, Esposito had been meeting with Montagu and a Canadian businessman, Carroll Tessier.  The Duke agreed to become a limited partner and provide funding to the tune of  22.5-million dollars.  To secure his place as an investor, he'd given Esposito a cheque for 3-million dollars.

Esposito was in an unfortunate situation, so he made the best of it; he gave the league Kojima's money and used Montagu's cheque for the rest of the downpayment.  As Esposito later put it in his book, Thunder and Lightning, "Looking back, it's possible that without that cheque we would have been out on our asses right then and there."

There was just one problem.  Montagu's cheque bounced.  I'll let Esposito take it from there:

We had been had.  It turned out that the big house in Orlando wasn't Carroll Tessier's, that he was only renting it.  It also turned out that the woman with the hat wasn't the duke's wife.  The whole thing, we learned, was a big con to get the Barnett Bank to lend the duke thirty-two million dollars in cash - money he was going to take and run away with.

But in the end it didn't matter.  Before we realized that the duke was a lunatic con man, he served us very well, even though he had no idea exactly how he helped us.  When the duke entered the picture, David [LeFevre] and his partners lost their leverage.

As soon as LeFevre found out about the duke's cheque going to the league, boy, did he start singing a different tune.  LeFevre's Japanese investors came back so fast our heads began to spin.  When the duke's cheque bounced, we were forced to admit to ourselves that the duke was a fraud, but we didn't tell David that.  Instead, we told David that if he kept to the original deal we'd give his clients their original position back.  And he agreed, because the Japanese didn't want the duke involved in the first place.

It was not long before the FBI went after Carroll Tessier and the duke.  I was told that Carroll, a Canadian, skipped the country and fled to Indonesia or Pakistan or someplace.  The duke ended up in jail.  I think he was still behind bars when he died suddenly in July 2002.

Or to put things another way, the league's reluctance to allow Jim Balsillie into its ranks is confusing.  The value of a franchise in Hamilton would be incredible, so I don't see why they wouldn't hit him up for more money (given his obvious desire for a team, he'd probably cough it up, too) but it seems to me that a rich, passionate owner isn't a commodity the league should pass on so easily.

Particularly when the reputation of other owners - both current and former - is considered.