Because He's The Hero Ottawa Deserves, But Not The One It Needs Right Now

Share All sharing options for: Because He's The Hero Ottawa Deserves, But Not The One It Needs Right Now 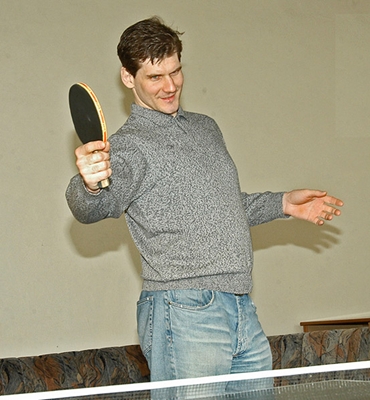 Ottawa sure knew how to draft, didn't they?  The team's first ever draft pick was Alexei Yashin, with the second overall pick in 1992.  The team got the first overall pick the following year, choosing to invest it in Alexandre Daigle.  Anyways, that isn't my point, so back to Yashin.

Yashin is the subject of what - by far - is my favourite quote in The Hockey News '09 Draft Preview:

The Eastern Conference scout agreed that hard-to-categorize elements can often be as deciding a factor in a player's NHL potential as any particular skill set.

"Competitiveness, determination, willingness to improve, desire - however you want to characterize it, those types of intangibles are more important than ever," the scout said.  "These players are 17, 18 years old and you just can't program them as if they were robots.  Their commitment away from the ice is so important, because that's what will allow a player to continue to develop."

One example of such dedication was seen in the early-career improvement of former NHL'er Alexei Yashin, who insisted the house he bought in Ottawa have an unfinished basement; basically just a quartet of concrete walls.  With such a design, Yashin was able to set up a net and stickhandle and shoot for hours there every day.

And Yashin had already turned pro.

I assume that Adam Proteau saw the irony in that example when he wrote it out, given what Yashin's NHL career looked like. In five years with the Senators, Yashin demanded a new contract on three separate occasions, culminating in a holdout that saw him miss the entire 1999-2000 season and also saw his captaincy removed.  In 1998, he'd pledged to donate 1-million dollars to the National Arts Centre in Ottawa; one of the conditions of the donation was that the NAC pay his parents $425,000 for services that were never really defined and were likely nominal.  The NAC declined, leading Yashin to withdraw the promised donation.

After his holdout, and after all of the bad press, after losing his captaincy, Yashin came back and played for Ottawa in 2000-01.  He had the second-best offensive season of his career, scoring forty goals and eighty-eight points.  After subsequently being traded to the Islanders (in exchange for the 2nd overall pick (Jason Spezza), Zdeno Chara and Bill Muckalt) he was frequently criticized but always finished near the point-per-game mark with the exception of 2002-03, where he recorded 65 points.  In his defense, the Islanders only had one other player top the fifty point mark.

The point of all this isn't to defend Yashin; just to emphasize that character is all too often in the eye of the beholder.  Yashin was dedicated ot the game of hockey, and dedicated to his career.  He was an NHL captain in two cities.  At the same time, his frequent clashes with management and his refusal to honour the final year of his last contract with the Senators showed a selfishness and even dishonesty.

Character isn't universal; hockey is full of players who leave it all on the ice but who are irresponsible or worse off of it.  It's also full of players who are well-liked by their teammates, great guys off the rink, who perhaps aren't willing to go into the dirty areas on the ice.  In other words, when someone's described as a "character" player, I generally take it with a grain of salt.