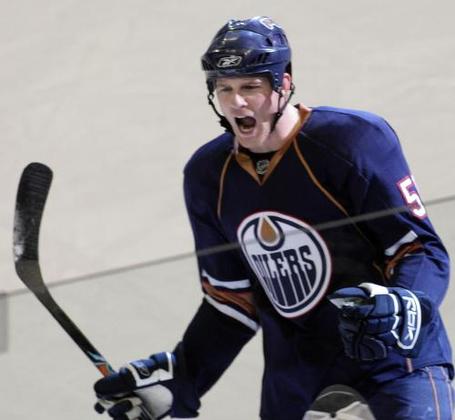 I'm an astronomer, not an astrologer, so my inclination is to look into the past rather than to foretell the future.

While I'm keenly interested in the Entry Draft and where the new names slot into the 50-contract limit and 90-player reserve list, I'm not really a prospectophile so will leave the analysis of the new recruits up to experts like Lowetide, Speeds, YKOil, or the Copper & Blue's own Jonathan Willis and Derek Zona.

It's pretty safe to assume that none of the newcomers will figure in the 23-man roster in 2009-10. Thus the transaction of most immediate concern Saturday was one of subtraction, not addition, as the Oilers shipped Kyle Brodziak and a 6th round pick to Minnesota in exchange for 4th and 5th round selections. Brodziak is one player we can analyze on past performance, not future projections; that he was moved on for such a modest return begs the question, why did he fail as an Oiler?

Kyle Brodziak is 25, born in nearby St. Paul, AB within a week of the Oilers' first Cup in 1984. Passed over in his first year of draft eligibility, Kyle was stolen in the 7th round, 215th overall, in 2003, and immediately began covering the bet. After finishing strongly with the Moose Jaw Warriors in the WHL, improving his goals, points and plus for each of his last three seasons, Brodziak essentially duplicated that progression during three nearly-complete seasons with three different AHL teams. The last two years he earned cups of coffee with the big club (10 and 6 GP) before making the jump for good in 2007, just turned 23 and fully grown to a strapping 6'2, 209. Over the past two years he played 159 games for the Oilers as a 13-minute-a-night fourth-liner, penalty killer, and faceoff specialist, posting 25 goals and 58 points for a bargain basement cap hit of $497,500.

Lets put that bargain price and his production in perspective of other Oiler forwards over the past two seasons:

With Brodziak's entry-level contract now at an end, he will obviously expect (and deserve) a significant raise as an established NHLer. Double it to a million bucks, and he still looks like a bargain by the above metric (which is admittedly suspect, and biased against big-ticket players). I'm betting he signs for less. For the small ticket he did command, those production numbers stand out, especially when compared to the non-producing third-liners at the very bottom of the list.

It's not as though Brodziak was padding his stats on the powerplay. He scored 51 of those points at even strength, 5 on the penalty kill, just 2 on the PP. In 2008-09 he played just 9 minutes with the man advantage, scoring a game-winning overtime goal in San Jose but otherwise being nailed to the bench. Meanwhile, he was second among Oiler forwards with 216 shorthanded minutes; of the 8 Oiler forwards with more than 40 minutes on the season, only Brodziak and Pisani had a better minus per 60 when on the ice than off. As much as Brodz appeared to struggle at times, his results were better than all but one of his teammates up front, as reflected by Gabe Desjardins' PK Rating at his wonderful site BehindTheNet.ca.

Brodziak was skating uphill at evens as well. He was heavily relied upon in the circle, where he was clearly MacT's second option, and it wasn't close after that:

Moreover, Brodz was on ice for a whopping 330 own-zone faceoffs compared to just 181 in the offensive zone, for a ZoneStart of +149. Lest you think that doesn't much matter, consider the extraordinarily pure sample set involving Brodziak with Shawn Horcoff. According to Vic Ferrari's faceoff data over at TimeOnIce.com the two (shown as #99) were on the ice together for 68 even-strength faceoffs on the season, 67 of them in the defensive zone. When those two were on the ice together -- barely 35 minutes total on the season -- the Oilers were outshot 27-3, while attempted shots (Corsi) were a staggering 59-6 against (see again #99 in this shots analysis, also courtesy TOI.com). Those draws taken with the reliable Horcoff on the ice account for just +66 of Brodziak's overall +149 ZoneStart number; it's easy to imagine those additional own-zone draws accumulating negative Corsi's at the equivalent rate (-0.8 per draw) if not higher. That's -120 shots right there. Suddenly Brodziak's lousy Corsi numbers (-14.5 per 60, -187 gross) gain a little perspective.

Shots aside, the game is about outscoring the other guys. That Brodziak posted a +4 mark on the season is mighty impressive for a guy who started at such a disadvantage. While Brodziak didn't face the toughest QualComp (-0.07), his QualTeam was even lower (-0.12). That he spent more time on the ice with Steve Staios than any other Oiler is our first clue, while according to HockeyAnalysis.com, his most common linemates were Ethan Moreau (260 minutes), Zack Stortini (250), and a slew of lesser wingers like Steve MacIntyre and Liam Reddox or defencemen cum wingers like Jason Strudwick and even Ladi Smid for goodness sake. Ales Hemsky? Not so much. Curtis Glencross? Not at all.

An odd thing about Brodziak was his home/road splits. You'd expect a fourth-liner to get eaten up on the road where the opposing coach can drive the line match-ups in favour of his squad. That doeszn't quite explain this:

While obviously there is -- or should I say, was -- room for improvement in the "friendly confines", those road splits are not the sign of a guy who was overwhelmed in tougher matchups.

The most common knock on Brodziak was that he wasn't physical enough for a bottom sixer. I thought he was ideal playing between two grinding wingers like Stortini and GlenX, or even Stortini and Strudwick who along with Kyle put together a nice group of games before Zorg twisted his knee this January. Brodz understands the cycle game, is real good at getting the puck deep where his wingers can either win it outright or make an impression in the attempt, and is also real good at taking the puck from down low and muscling it right into the goal mouth. He had enough offence to post solid shooting percentages of 11.2 and 11.1 (despite zero powerplay time, lest we forget), and to average a dozen goals and 30 points playing with and (mostly) against dregs. That's a damn useful player in my books.

Brodziak was 9th among Oiler forwards in TOI, yet finished 7th in hits which while needing improvement is not the sign of a shrinking violet. Moreover, he comfortably led the forward brigade in blocked shots, and was the only Oiler forward with 50+ GP who had more takeaways than giveaways.

Young, cheap, big, versatile, improving ... for the life of me I can't see why Oilers or any team would give up on a player like this. Unless there are issues behind the scenes we don't know of, this is change for the sake of change. If it was Brodziak for Harding I would swallow hard and say it's likely worth it, but for a fourth and fifth rounder? That's pretty minimal: in Brodziak's draft year, for example, only one fourth rounder -- Jan Hejda! with 202 -- has played more than Kyle's 175 GP; the other 34 fourth-rounders from 2003 have played just 167 games combined. It's just not that good a bet, and for a guy to come from any of the late rounds and make the NHL is very much the exception. Kyle Brodziak has been that exception, so why throw him back now for another roll of the dice against long odds?

Even if Steve Tambellini plans to sign a solid third-line centre over the summer, he's still going to need a solid fourth-line centre. The Oilers already had one, and they just let him go. They didn't exactly release him back into the pond, either; they threw him right into the boat of a divisional rival. I don't understand it.

Oh well, at least we'll get lots of chances to see how he progresses in Minny. Sigh.