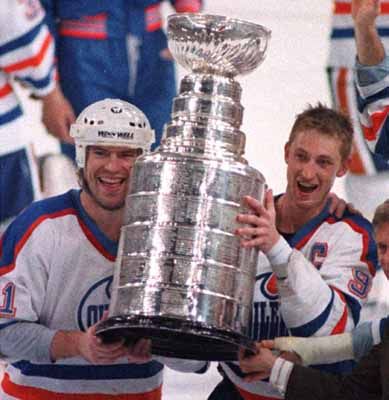 Hi, my name is Bruce, and I am a hockey addict. It has been zero hours and zero minutes since my last fix.

I'll keep the introduction brief since many of you will already know me through my blog Oil Droppings which I maintained during the 2008-09 season, and through my frequent commentary around the Oilogopshere over the past couple of seasons. In short -- which is not my usual style! -- I've followed the NHL and international hockey continuously since 1963. My family moved permanently to Edmonton just in time for the inception of the World Hockey Association and the Oilers, whom I have followed since the beginning. I was fortunate enough to be a full season ticket holder from 1977 to 1993, and watched an average team in a rival league rapidly develop into an NHL "expansion" franchise, a record-shattering offensive juggernaut, and five-time Stanley Cup champion. It was a hockey fan's dream come true, and remains the gold standard against which I measure not just the current Oilers but the state of hockey.

While I have enjoyed the autonomy of my own blog, the offer to join forces with knowledgeable hockey followers like Jonathan Willis (a.k.a. Jonathan, Willis, JW, Jon, Johnny, etc.) and Derek Zona (a.k.a. Coach PB 9617, Kurri_17, "The Church of Kurri") was too tempting to turn down. I look forward to sharing insights with them, and with the many readers here at the Copper & Blue.