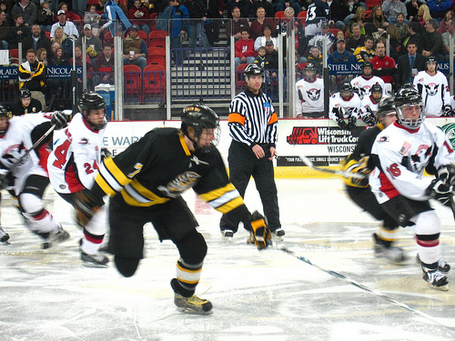 This is Michael Forney.  Forney was THN's top-ranked draft eligible forward out of U.S. High School Hockey for the 2006 draft, ranked 24th overall.  He dropped in the draft, going 80th overall to the Atlanta Thrashers.  Forney was described as a big, offensively talented forward, although scouts worried that he wasn't being challenged enough in high school hockey.  Here are his statistics, projected over an 82-game season:

Those are numbers that project better than all but two of this year's draft-eligible high school forwards.

In any case, Forney has struggled since leaving high school.  Injuries have been a problem, but he hasn't been able to consistently crack the NCAA lineup even when he's been healthy.  This past year he was a point-per-game player in the USHL, and despite being only 21 years old his career in professional hockey is almost over before it's even begun.

In any case, Forney illustrates some of the difficulty with drafting players out of high school; they aren't challenged, and it's very, very difficult to know how they'll respond when they inevitably move to more difficult leagues.  After the jump, we'll review the list of CSB-ranked forwards.  This is the fifth part of my draft series.

Chris Kreider always seems to be lauded in scouting reports.  He's big (6'2", 201lbs), and described by some scouts as the best skater in the draft.  One anonymous scout quoted by THN said that he's "not sure there are many guys in the NHL now who skate better than this guy". Eyes on the Prize and Matchsticks and Gasoline have both done previews of Kreider; the former being rather complimentary and the latter being far less so.  As for myself, I haven't seen Kreider play, but I do have one question: if he's such a physically talented player, why have six other high school players scored at a higher rate than him?  Something doesn't add up.  This is not a selection I'd be comfortable making.

Erik Haula's numbers are even worse than Kreider's.  He's a small guy who won't even play NCAA hockey until 2010, so he won't play difficult competition until he's nearly 20.  Guy Flaming posted a brief profile on his website, and he quoted a scout who had this opinion of Haula's upside:

"He's a decent player but I don't think he's got a lot of offensive upside but he's pretty smart away from the puck and he knows what his responsibilities are. I don't think he'll be a top 6 guy but he could be a good 2-way player."

I have trouble getting excited about a small forward with minimal offensive potential who is learning a defensive game at the high school level, but maybe that's just me.

Zach Budish's numbers are misleading, since he played very little after blowing out his knee in October.  He's huge (6'3", 229lbs) and according to all reports has a ton of offensive talent.  Kent does a nice profile on him here, but here's the story in brief: he's big and can score, but he's a) coming off a very serious injury, b) only played in a weak league and c) was never a very good skater even before injuring his knee.  He could be a great bargain late in the first round or early in the second; he could also be a total flop.

Ben Hanowski has the best point totals of any player in high school hockey; in fact, he's the highest scoring player in the history of high school hockey in Minnesota.  There's one problem - according to multiple reports he was playing some of the softest competition in high school hockey.  He's got good size (6'2", 198lbs) but scouts worry about his all-round game and nobody seems to trust his offensive totals.

Western College Hockey lists Danny Mattson's strengths as his skating and his playmaking, something that's easy to believe based on his point totals.  He isn't big, isn't strong, and isn't reputed as a strong defensive player, but he is a highly talented playmaker.

And My Overall Feeling...

Is that top prospects generally don't play high school hockey.  I'm not big on any of the players listed here; Budish would be my favorite based on scouting reports and the fact that he didn't get a full season to show what he could do, but I don't like him as much as Central Scouting or THN.  I'd rather risk draft picks on players in better leagues.