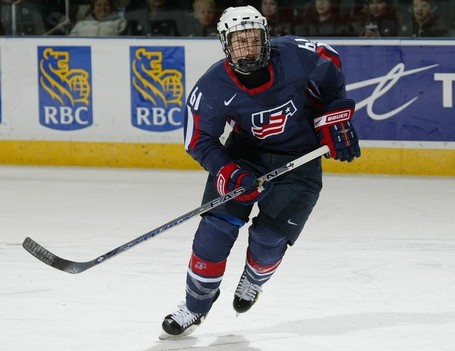 This is part four of my draft preview series.  While the first three itmes dealt with forwards in the OHL, WHL and QMJHL, my focus now shifts south of the border to look at the United States National Team.  Despite a less than stellar year for the U.S. U-18 team that saw many players struggle, there are a number of good forwards available, with Jeremy Morin, Drew Shore and Kyle Palmieri all expected to go in the first round.

As always, the official CSB rankings and THN's draft preview were extremely helpful in putting this list together.

Jeremy Morin is probably the consensus top-ranked forward off of the US National Team, but Drew Shore and Kyle Palmieri aren't far back either.  Morin's easily the best shooter of the trio, and is widely regarded as one of the best pure scorers available in the draft.  THN's draft preview raises questions about his character, with one scout calling him an "enigma", but it seems like a few of the questions have been answered elsewhere.  Aside from his goal-scoring ability, Morin has things to work on; he could probably make better use of his teammates and he's not much of a skater and not overly responsible defensively.  Statistically, he's well clear of Shore and Palmieri offensively.

Drew Shore's a different sort of player, and his offensive numbers aren't much to look at.  There have been contradictory reports on him; Western College Hockey put together a nice piece that seems to indicate he's not a great skater and needs to work on being less of a perimeter player; THN on the other hand quotes two different scouts who call him a good skater, although both worried about his passion/consistency.  Regardless, nobody is calling him a budding scorer, and Red Line Report's Kyle Woodlief had the most damning criticism (h/t to Stanley Cup of Chowder):

"Classic case of a guy who looks like he should be a player, but ultimately isn't."

I don't disagree with that; I'm not a fan of Shore, even as a lower first-round pick.  At 23rd overall (where THN ranks him) he's a poor bet.

Kyle Palmieri may well be the best of the trio.  John Fischer put together a must-read compilation on Palmieri yesterday.  He did great at the NHL Draft Combine; he may not be big, but he's very, very strong and his offensive numbers weren't bad at all.  Additionally, there's this quote, which does as good a job of self-salesmanship as anything I've seen:

"My strongest assets are my ability to create offense, my strength with or without the puck, my work ethic and my hockey sense.  I'm not one of the bigger players on the ice, but I'm never intimated by anyone and I'm willing to go into the corners to get the puck. I know I can't control how tall I am, but the one thing I can control is my work ethic."

Chris Drury is the name that keeps coming up in comparison, but I don't see Palmieri as having Drury's offensive game; he's probably closer to being John Madden.  He's a great skater, plays a two-way game, and is strong but not big.  I'd like to know more about his situational play, but I think he'll be a player.

On a team where "character" is a knock on virtually every player, smallish LW Jerry D'Amigo is an exception, at least according to his coach:

"He's a solid player for us," Under-18 coach Ron Rolston said. "He's a great, great character kid. He has a lot of leadership abilities for our team. He competes every night. You know what you're getting out of him every single night. He's got great speed. He makes things happen with his speed."

He's also (like Palmieri) rather heavy (196lbs) despite his lack of height (5'-10 1/2") and given that he's a good skater I'm guessing it's more muscle than anything else.  I'm really not sure why he isn't considered with the top three, given his offensive totals.