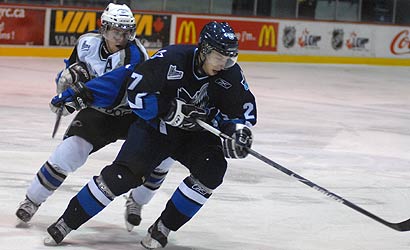 This is the third part of my draft preview series.  The first item dealt with OHL forwards, while the second part dealt with forwards currently in the WHL.  Logically, the next league to scan is the QMJHL.

Unfortunately, the list of impact prospects in the QMJHL is mostly limited to defensemen, with several first round possibilities; of the forwards, only Jordan Caron has a real shot at being a first round player.  I've made up a list of other prospects below; as before, I again included everyone listed in the CSB's final rankings and projected their point totals over an 82-game season.  Also of help was the QMJHL Top-25 list that Kevin Forbes did up for Hockey's Future.

It's a really strange list; in the WHL there were a ton of very talented forwards who were getting knocked down the list because of a lack of size.  Here, it's the opposite - there are quite a few very decent forwards with size, but their skating is questioned.

The consensus seems to be that Jordan Caron is the best draft-eligible forward in the QMJHL.  He's big (6'2", 202lbs), plays a physical game, has good hands (36 goals in 56 games for Rimouski) and drives to the net, but there are a couple of caveats.  For starters, Caron's suffered injuries every year in the QMJHL, and that has to be a concern.  More importantly, his skating is only average, and he's going to have to get quicker.

David Gilbert, on the other hand, is a very good skater.  He's also not small (6'-1.5", 176lbs) and according to most scouting reports is gifted with above average offensive abilities.  The problem, according to most scouts, is flagging effort and an unwillingness to enter into traffic areas.  Despite these reported abilities, Gilbert's offensive totals aren't terribly impressive compared to the rest of his draft, and I don't know that I share THN's optimistic appraisal of Gilbert:

A team with good development coaching will gladly take him in the second round.

THN ranks Philippe Paradis about thirteen spots below David Gilbert, and well back of Jordan Caron, a notion that Central Scouting disagrees with.  Paradis is just five spots below Caron in their final rankings, and he's well ahead of Gilbert.  THN's scouts view Paradis as a slightly less-talented version of Caron; a talented forward with good size and decent offense, but probably not enough for a top-six role in the NHL.  On the other hand, Paradis does have a heavy shot; he won the hardest shot competition at the Top Prospects game.  Shawinigan coach Eric Veilleux talked to NHL.com about one of the things Paradis brings to the table:

"He worked hard this summer strength-wise.  He came to training camp and he started running people over like there's no tomorrow. I honestly think that he's one of the best hitters in this league right now. There wasn't one particular hit that I remember, but he has four or five hits in every game that are big hits."

"He's been taught to put it together day-in and day-out.  When you have skills sometimes you concentrate on just your skills, but now he is concentrating more on his hitting. Last year he concentrated more on his skills, but it is a matter of combining the two to make him a complete player. He's much better this season because he is maturing and he's obviously going to be a very good player."

I find myself agreeing with Central Scouting on this one; I'd certainly put Caron ahead of Paradis, but I think Paradis is likely clear of Gilbert.

Casavant's an intriguing prospect; frankly, I think he's the most interesting draft-eligible forward available in this year's entry draft.  CSB doesn't like him at all (ranked 162nd in North America) and THN doesn't list him in their top-100.  When I saw his scoring totals, I was initially inclined to assume that his size was what had him ranked so low.  Not so; CSB lists him at 6' 1/2" and 213lbs.  All of these would seem to indicate a top-tier prospect, and Matt Bugg of Dobber Hockey is one who feels like that:

A gritty power forward with extraordinarly soft hands, Casavant could go as high as 15 this summer ala Steve Bernier in his draft year.

That seems well out of sync with consensus, and the website Sabres Prospects offers us a hint as to why:

The St. Hyacinthe, QC native has developed into a leader in his first season on the island. Hard working and intelligent, Casavant goes to the tough spots to get his work done, and is difficult to move when he gets there. Like the aforementioned though (previous draft-eligible prospects Maxime Boisclair and Matthew Pistilli), he doesn't have that acceleration and overall swift skating stride to make him an elite prospect, and thus was rated #185 by CSB on their mid-term rankings.

Skating is a critical skill; and obviously Casavant would need to make drastic improvements to qualify for the NHL.  In this respect, he sounds rather like Tomas Vincour: quality player, just add skating.  Someone is going to take a chance on Casavant, and he's probably a good bet with a mid-round pick.

A Hint of Caution Regarding Goulet and Bourque

Guillaume Goulet and Gabriel Bourque are a pair of smallish, offensively talented forwards who play on the same line for the Baie-Comeau Drakkar.  Goulet's a little bigger and more of a goal-scorer, but Kyle Woodlief of Red Line Report made one comment worth keeping in mind about the pair of them (and Casavant, for that matter):

Speaking of the Quebec League, there's something to be said for being a young player on a really bad team. Take Gabriel Bourque and Guillaume Goulet in Baie-Comeau.

The two forwards are decent prospects but couldn't be in a better position to help their cause. Bourque and Goulet skate on the Drakkar's No. 1 line with 20-year-old Felix Petit and get to enjoy limitless time on the top power-play unit. There aren't many draft-eligible players in the Q who get to enjoy those luxuries and the Baie-Comeau duo can thank their team's woes for their personal gain.

As For The Rest