Jonas Gustavsson Passes On Edmonton; Leafs May Be Front-Runners

Share All sharing options for: Jonas Gustavsson Passes On Edmonton; Leafs May Be Front-Runners 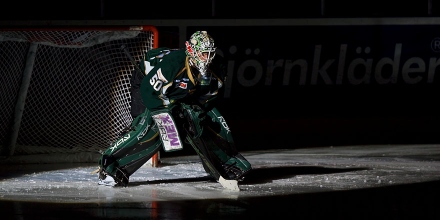 Gustavsson is a highly-touted prospect who was never drafted.  Now 24, he had been pursued by multiple NHL clubs, including the Edmonton Oilers.

I had a look at Gustavsson's career-to-date which can be found here; suffice to say that there are many good reasons for NHL teams to be ardent in their pursuit of the big Swede.  At the time I said the Oilers should push for him, even dumping Jeff Drouin-Deslauriers if neccessary.  Unfortunately, back in early May a report came out which stated that Gustavsson had narrowed his choice to one of four teams: Dallas, Colorado, San Jose and Toronto.

That report has been confirmed, as Gustavsson's agent (Joe Resnick) stated today that his client would visit those four teams (a move reminiscent of Fabian Brunnstrom's North American tour last summer).  Colorado is most obviously in need of a starter, but Toronto would appear to have the inside track, as Resnick stated that their recent hiring of Francois Allaire would work in their favour.  Brian Burke has a good track record with European goaltenders, and his last undrafted find (Jonas Hiller) worked out pretty well for him.

For the life of me though, I can't figure out how Dallas - with virtually no cap space and an established starter - got ahead of Edmonton on that list.  It makes me wonder how aggressive the Oilers' pursuit was, and it also makes me wonder if they're satisfied with Deslauriers as the team's #2.