NHLPA Head Paul Kelly on the Future of Hockey

Share All sharing options for: NHLPA Head Paul Kelly on the Future of Hockey 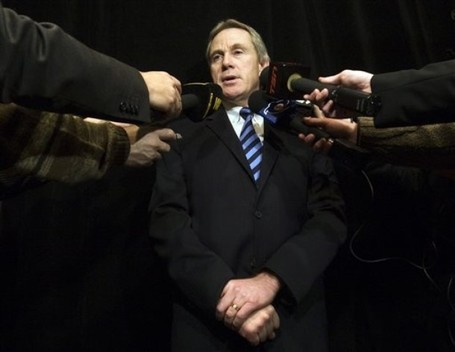 Paul Kelly's done tremendous things to repair the image of the NHLPA since the 2004-05 lockout.  Inevitably, the head of the players' union is compared to the NHL commissioner, and as far as I can tell Kelly's come out ahead on every issue so far, from the Olympics to moving teams to Canada.  He's intelligent, a good quote, and he constantly exhibits a public desire to grow the game above all other things.

Kelly's currently in Switzerland, where he'll address the IIHF Council (the first NHLPA head to do so).  There he was part of an excellent interview, the first part of which was published today at the IIHF website; I strongly recommend reading the whole thing but I've pulled out some highlights.

I think it’s important to press into other geographic areas. We’d like to see the sport grow more in the Far East, China, unusual places like Australia, Israel, maybe South America, the non-traditional places. We’d like to help promote growth. It will be difficult and will take a long time, but if we make appearances, televise games, we can gain a foothold, I think... I think the Olympics are a big part of that. There is no bigger event to expose our sport to non-traditional countries.

This is familiar territory for Kelly, who has expressed similar sentiments before.  He used swimming as an analogy and referenced a huge increase in the sport after Michael Phelps' performance in Beijing, and he also referenced the Miracle on Ice as a similar moment in the United States.

Given the statements that people like Bill Daly have made about playing increasing amounts of hockey in Europe, it seems that both the NHL and NHLPA have a global mindset when it comes to expanding the game.

This is something that Kelly's repeatedly pointed out; the Olympics are definitely going to be a point of discussion for the new CBA.  Here again I think that the NHLPA is right to take this side of the issue, both from a public relations perspective and from a pragmatic perspective, and hopefully the NHL will come around on this point.

I’m a proponent of breaking the NHL season every year for two weeks, every February. One year we should do the Olympics, one year we should do something special for hockey, hold a worldwide youth tournament, a hockey summit, then the World Cup, maybe in Europe one year and North America the next. That said, the NHL doesn’t share my view right now. Everybody’s got to give a little for the greater good. We need to do a better job of making the sport more accessible to people.

This is a rather interesting proposal, and I can see why the NHL wouldn't see eye-to-eye with Kelly on this point.  I tend to agree with Kelly here too; because while two weeks off won't bring people to watch the NHL, two weeks focused on an international event similar to the Olympics should grow the sport and that should only benefit the league long-term.  That said, I'm not firmly convinced that he's right, and I'm fairly convinced that as a practical matter it won't happen anyway.

We don’t support putting restraints on contracts. We believe there should be maximum flexibility by NHL general managers to sign guys to long-term contracts.

This is the most self-serving statement in the entire article, and it's couched in an NHL-friendly tone ("maximum flexibility").  Really, this comes down to a case of saving NHL managers from their own stupidity by curtailing their ability to hand out long-term deals.  From the players perspective, everyone likes the security of term, so it's a no-brainer argument from an NHLPA perspective.

One thing the IIHF wants that you don’t want is to increase the window for signing drafted players from two years to four. Can you see this ever happening?

This is very interesting, for a number of reasons.  From an NHL perspective it maintains the added incentive to draft European players, since they have more time to develop than their North American counterparts.  On the other hand, on the surface it's hardly fair for late-blooming North American players.

I think this is a great point, and one I hadn't considered before.  There were a few high-profile defections (Jagr, Radulov) and other than that the NHL didn't seem to lose much by not having a transfer agreement.  European clubs, on the other hand, are losing out on actual money, and it may be that the NHL and NHLPA have the IIHF over a bit of a barrel on this one.

Do read the full interview; it's extensive and well worth the time and I've only quoted it in part.