Awkward Comparison of the Day

Share All sharing options for: Awkward Comparison of the Day 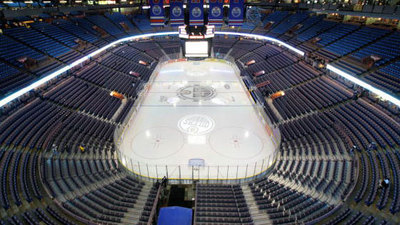 Here's a pair of fun quotes from a local newspaper:

The emergence of Rexall Place as a top-tier venue for concerts and other events -- Pollstar magazine ranked it 12th worldwide in 2007, in terms of ticket sales -- has helped Northlands cement its status as one of the country's premier players in the entertainment and trade-show business.

Although Huntley didn't utter a word about the prospect of a new downtown arena eventually replacing the aging and undersized Rexall Place, he didn't have to. It was on everyone's mind, including that of Oilers president Patrick LaForge.

It's not precisely a contradiction in terms, but describing the same arena as "a top-tier venue for concerts and other events" and "aging and undersized" in the same article definitely fits into the sending mixed messages file.

Seeing as I don't live in Edmonton, or even Alberta, I really could care less how many tax dollars end up being spent to provide a new home to the Oilers; in fact, as someone who wants to see the Oilers be as profitable as possible, I might even lean toward spending all that money that isn't coming out of my pocket.

On the other hand, I don't think anyone should be blinded by the way Laforge & Co. or Gary Bettman talk; a new arena is not about neccessity in any way.  A new arena serves to maximize revenue for the Oilers - nothing more.