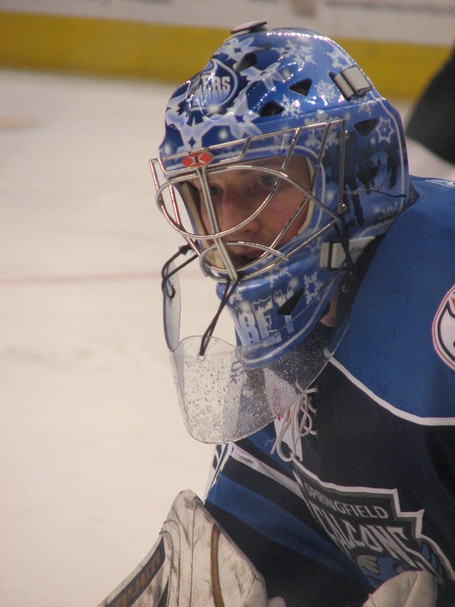 There’s a fun discussion going on over at Lowetide’s about how good Devan Dubnyk’s season was. At first glance, a .906 SV% doesn’t seem terribly impressive for a 21-year old, especially one as highly touted as Dubnyk. On the other hand, Springfield was atrocious this past season, making it an open question as to how much of Dubnyk’s middling save percentage number was him and how much was the team.

With that in mind, I decided to look at every AHL goaltender over the past ten seasons who played for the same team over two years, and saw that team take a downturn similar to the one Springfield took from 2007-08 to 2008-09.  Results after the jump.

Unfortunately, with only 15 goaltenders matching the criteria over ten seasons, there isn't a huge sample to choose from.  On average, most goaltenders lost about ten points off their save percentage on teams that dropped as many wins as Springfield did over the past two seasons.

Still, at this point it would be unwise of the Edmonton Oilers to give up on Dubnyk.  It is extremely likely that Springfield's implosion masked a rather decent developmental season.