Share All sharing options for: Ryan Ellis, If Available 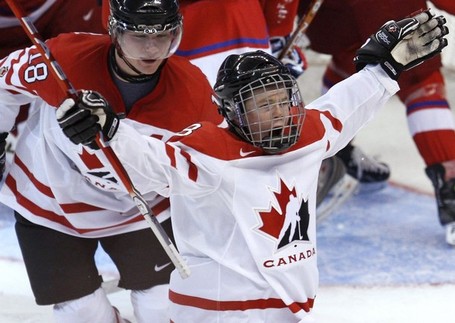 The title to this post is the answer to the question "Who should the Oilers select at the 2009 NHL Entry Draft?"  Ellis has had a phenomenal junior career so far, but doesn't seem to be getting a ton of respect from scouts.

TSN has Ellis ranked #12 for the upcoming draft; ISS puts him at #13 and Central Scouting ranks him as the 16th-best North American skater.  I think they're all wrong, and I have some backing from Puck Prospectus.  Here's a quote from an Iain Fyffe piece answering a question I'd been researching:

To answer my own question, no, there has never been a 17-year-old defenseman who led the OHL in assists. I went back to 1955 to check....

In fact, the only age-17 defenseman I could find to even crack the top three in assists in any year was Bobby Orr, in 1965-66. Orr had one hell of year for Oshawa, scoring 38 goals and 56 assists for 94 points in 47 games (the schedule was 48 games). He finished second in assists, third in points (behind Andre Lacroix and Danny Grant, both age-20), and fifth in goals.

So, this year Ryan Ellis did something not even Bobby Orr could do.

Fyffe than downplays the comparison between Orr and Ellis (Orr was a better goal-scorer) but even so, the magnitude of Ellis' achievement this season isn't being properly recognized by the scouting community as a whole.

Sure, Ellis is undersized.  Sure, he's reportedly got some holes in his defensive game.  But that pales in comparison to his offense.  Here's another fun comparison; this one between Ellis and the consensus #3 selection, Matt Duchene:

Both players played for powerhouse teams, and that should be noted.  That said, Ellis' performance means he should be a slam-dunk selection if he's available at #10.  Personally, I'd select him even higher.