Share All sharing options for: Anyone Speak Swedish? (Motin Coming to Town?) 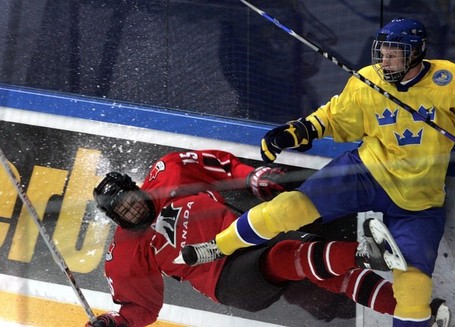 Johan Motin appears to be coming to North America, according to multiple reports in Swedish newspapers.  Again, I don't speak Swedish, but as far as I can tell Motin has an oral agreement with the Oilers on a contract, and the article mentions the AHL so it appears that he's willing to spend some time on the farm.  This is another case of "as far as I can tell" but it appears the chief issue is that his Swedish club (Farjestads) simply isn't giving him enough ice-time to develop properly.

I did a brief summary of Motin when he was drafted, and one of the more favourable reports I cited came courtesy of Illegal Curve:

The last in the series of Euro prospects this week, Johan Motin is another Swedish defender who is likely close to NHL ready. He has already played half a season in the Swedish Elite League and boasts a steady, mature game at 18 years of age....

In addition to being mean, Motin plays a simple low risk game and doesn't give up on any play. He connects on his passes and makes the correct decisions with and without the puck. Though he won't impress enough to stand out, he may turn into one of those guys whose play you don't notice, but will nevertheless be an effective player.

The Oilers have had excellent luck with European defensemen during Frank Musil's time with the club although this pick would seem to come from Nilsson territory.  Regardless, if he is coming over to North America it is very good news; he can develop in the AHL at a much younger age than most prospects, and it also shows a willingness to do whatever it takes to make the NHL.