Share All sharing options for: Department of Obvious Statements: 20 Players Dress Every Night 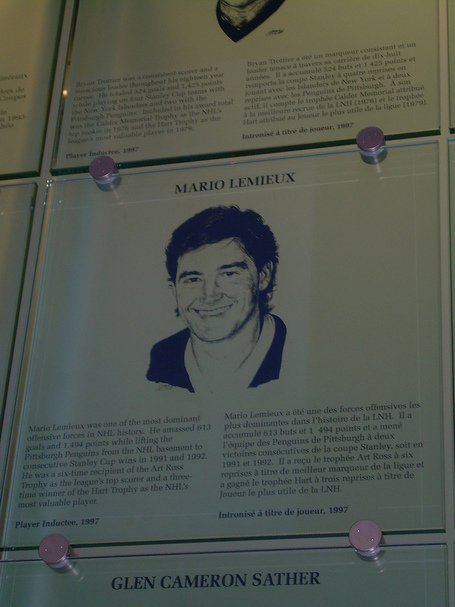 There's an interesting discussion going on over at OilersNation about the relative value of Ales Hemsky.  Several posters have taken a position that he simply isn't good enough offensively to lead the Oilers anywhere above the 8th playoff spot.

It's a position that fans of every team seem to take at some point; some examples would be "Joe Thornton can't lead his team in the playoffs" (connected to this is the older notion that "Pavel Datsyuk can't score in the playoffs") or "you can't win with Brett Hull".  It's bogus.  With the exception of some goaltenders (see for example Marty Turco, circa 2008-09) no one player can single-handedly doom or propel his team anywhere.

A great example of this is one of the greatest players ever to play the game: Mario Lemieux.

Mario Lemieux was drafted first overall by Pittsburgh in 1984.  He made the team the following year and won the Stanley Cup with them seven years later, in 1991.  However, for the six years preceding that Stanley Cup win, the Penguins struggled.

This wasn't Lemieux's fault; over those six seasons he put up incredible statistics:

Despite that incredible offensive output, Lemieux's Penguins made the playoffs once in those six seasons.  Was Lemieux to blame for this?  Of course not, because it's a team game.  In fact, Lemieux won numerous awards for his own play, being named to either the first or second all-star team four times, winning the Lester B. Pearson Award and Art Ross trophy twice, and also winning a Hart and Calder trophy in that six year span.

20 players dress for every team, every night.  On forward, especially an impact forward, can have a large influence on how the team performs, but he can't single-handedly lead them to success or failure.  This should be obvious to everyone.