Wang and Kumar Go To Nassau

Share All sharing options for: Wang and Kumar Go To Nassau 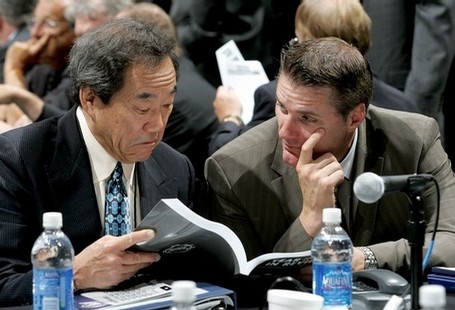 That quote is a rather incredible one to be hearing, but when Charles Wang says it he's really complaining about how long it's taking to get a new arena for his New York Islanders.

Wang claims that he's lost roughly 300 million dollars during his ownership of the Islanders, figures that NHL Vice President Bill Daly backs up:

"His numbers are real," Daly said. "Yes, we're aware the Islanders lose money, a significant amount of money. And it goes back to the team's need for a new arena."

That isn't to say that they don't need a new arena; back in 2003 and 2004 when they were making the playoffs they were still below league average in attendance, but I very much doubt that it's a coincidnece that more people come to the arena when the team is winning hockey games.

It seems to me that there are three reasons why franchises are unable to sell tickets: 1) being in a bad market, 2) losing lots of games and 3) having a small, outdated arena.  The Islanders are an established team, so I'd say the market is just fine, but the primary blame for the Islanders incredibly poor attendance is probably point #2 rather than point #3.

The team has been a laughing-stock during Wang's ownership; they've had three general managers, including:

They've played poorly and squandered the draft picks that the NHL hands out for such performances; this team could have had Roberto Luongo, Olli Jokinen, Jason Spezza, Zdeno Chara and Dany Heatley, but they traded Jokinen and Luongo for Mark Parrish and Oleg Kvasha, Spezza and Chara for Alexei Yashin, and drafted DiPietro instead of Heatley because they needed to replace Luongo with someone with better upside.

It seems to me that most of Wang's wounds are self-inflicted.  His original partner is in prison, and he's meddled in the hockey operations department since Day 1.  The men he's allowed to run his franchise for more than a month are either blatantly incompetent or woefully inexperienced.

The NHL's role in all of this should not be ignored either.  While Bill Daly confirms Wang's losses, independent sources like Forbes magazine have questioned the NHL's figures:

The difference between what the league is stating as losses and our figures has to do with what's included as revenue. For instance, the NHL included only half of the $17 million the New York Islanders got last year for their cable broadcasts. For Islanders owner Charles Wang, who paid $188 million for the team and its cable deal in April 2000, the economic value of owning the team certainly includes the entire cable deal.

Of course the NHL refused to speak to Forbes about that issue (and others), so despite the fact that the NHL confirmed Wang's numbers I doubt they're accurate.  Does it make sense for Wang to have lost nearly twice as much money as he initially staked to buy the team?

Leaving all that aside, it's important to remember that these teams are businesses (as the NHL so emphatically reminded us during the lockout).  If business conditions get to the point where a change is required, it won't matter how much money the city has ponied up to help a new arena along - and it isn't like a new arena guarantees profits anyway, as the Phoenix Coyotes have shown.  Besides, even with a new arena, how will the team make money if they continue to be managed incompetently?  And if the team continues to lose money, would they remain in place or would the city be left holding an empty arena while the NHL is busy reviving the Kansas City Scouts?