Oilers Chose Not To Offer Rookie Max To Omark?

Share All sharing options for: Oilers Chose Not To Offer Rookie Max To Omark? 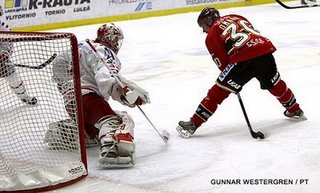 A couple of articles in Sweden today picked up on Kevin Prendergast's comments praising Linus Omark's performance at the IIHF World Championships, including the Norrbottons Kuriren, which had this to say:

That's the original text, which I ran through Google Translator, and it spat out this:

There have been NHL club Edmonton Oilers unnoticed.

As earlier in the spring chose not to offer Linus Unchecked top salary for Rookies, $ 850,000, equivalent to 6.6 million in annual salary.

The reason I point this out is that everything I've heard from Prendergast would seem to indicate that the debate was not about money, but rather about a guaranteed roster spot.  Now, it's possible that there's a translation error here, and it's also possible that this has cropped up somewhere before, but I certainly haven't seen it.

Thoughts?  I'm especially interested if the translation can be confirmed.