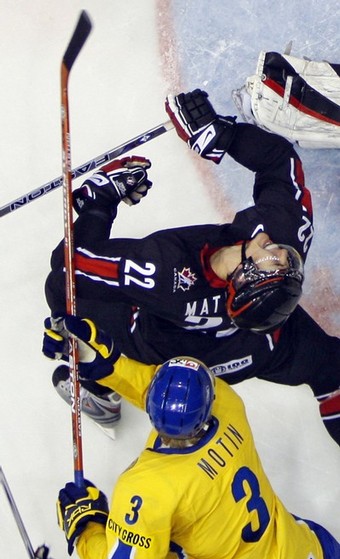 The Oilers have two prospects of note who have played their last two seasons in the Swedish Elite League (Elitserien): Linus Omark and Johan Motin (above).  The Elitserien's official site actually has a (sometimes problematic) English option which makes browsing it easier, and they've started to supply some statistics beyond the "boxcar numbers".  Here are the numbers for Omark and Motin from the past two seasons, along with a bunch of commentary:

Admittedly, this isn't all terribly revealing information, but there is some value here.  For example, the goals for/against at evens show that much of (the majority of?)Omark's offensive jump was at even-strength.  I'm fairly leary of his scoring jump; at a guess I'd say he's probably somewhere between the two extremes these two years show although being more selective with his shots this year may have helped somewhat (his shots/60 was actually down).  Regardless, it seems likely that his goal scoring totals flatter his actual ability here and that he's much more of a playmaker than goal scorer at this level.

Regardless, the defensive rates in what was a low-scoring league are fairly good, but that 5-on-5 offensive number is off the charts good - and that fits nicely with what I've seen of him at the World Championships.  In the offensive zone, Omark simply knows what to do with the puck.

As far as situational play goes, I'd guess that the line of Omark, Johan Harju and Mats Lavander were playing the softer competition (Omark has the best GF/GA of that group though everyone's in the same range)  while Lubos Bartecko's line handled the tough opposition.  Ex-Oilers' prospect Jonas Almtorp may have had some time in that role as well, although I'd bet heavy money that Bartecko had the toughest job on the team.

Johan Motin played the role of rarely-used seventh defenseman for Farjestads this season.  The club had five defenders who played between nineteen and a half and twenty-one and a half minutes a night, one guy who played a little over seventeen, and than Motin way down at eleven-something.

Motin's rates improved dramatically year over year; in 2007-08 he had just about the worst possible goals against and goals for (keeping in mind that the SEL isa low-scoring league), while this year things flipped somewhat.  I'd guess that the offensive numbers don't have a great deal to do with Motin; he has no reputation for offensive production and has yet to record a goal in morethan 100 SEL games.  The defensive numbers on the other hand likely do, and Motin took a step forward this year (based on the data we have).  Given how his offensive numbers skyrocketed, I'd guess the coach decided to shelter him by deploying him a lot in the offensive zone (call it the Jason Strudwick treatment), although that is just a guess.

Apparently Motin's a nasty sort, and that always comes in handy - especially with the sort of rosters Springfield and Edmonton have filled out lately - but his SEL numbers do not inspire confidence.  Still, the Elitserien is even more hesitant about giving kids ice-time than the NHL is, and Motin's been playing, so one imagines that he'll at least spend next season above the ECHL demotion line.