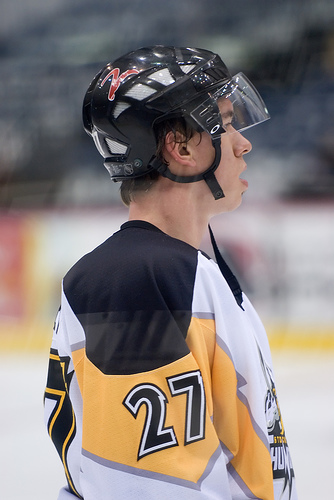 Rob Tychowski ran a story on th weekend about Rob Schremp and how he now has a "clean slate" with Craig MacTavish out of the picture (I'd provide a link but the Sun website seems to have lost the article).  Schremp said the right things, didn't gloat, talked about how the organization had his best interests at heart.  It's a familiar pattern with Schremp; he generally says the right things but the performance isn't always there.

This isn't a pick on Schremp article, though.  The guy pictured above is Stephane Goulet, a lower draft pick who has always been something of a fringe prospect.  A tall, lanky forward with good hands and poor skating, the Oilers must have hoped he'd add some muscle and work on his skating, since if he could get past those two obstacles they'd have a player.

Last summer the Moncton Times & Transcript did a piece on Goulet, and one of the things they asked him was what he had to improve on.  Here's what he said:

I want to get faster and stronger. That's what I have to do. I improved my skating last summer and I'm going to keep working on it. I'll go back home to Quebec and train with some NHL guys this summer. It's going to be a tough summer, but I'm looking forward to it. I like working out so it's going to be fun. I gained confidence down the stretch and in the playoffs. I'm hoping to turn the page on the ECHL and play in the AHL all of next season."

Goulet played only thirty games this year; 18 in the AHL, 12 in the ECHL.  His scoring totals shrank from last year and the hoped for jump in his performance never came to pass.  Goulet is now 23 and has been in the organization for five years without securing a hold on an AHL roster spot; he's likely done as a prospect for the Oilers.

The purpose of this piece isn't to pick on Goulet, either.  The point is that observers (not just fans but also the media) can get to caught up in what prospects say, when in reality it's almost useless information.  Maybe Goulet did go home last summer and work on his skating; but the fact of the matter is that every player works on their weaknesses during the summer.  Most of these guys are in pretty decent shape anyway; they've competed at the amateur level, and in many cases in professional leagues as well - these aren't easy things to do at a low fitness level and the reality is that even allowing for things like growth and physical maturation, a lot of times there isn't much a ton of room to improve.

For every prospect like Liam Reddox who improves massively season over season there are a bunch of guys like Goulet who only improve marginally.  The reality is that players establish track records, and the best way to judge future performance is by past performance; there's a typical curve for every track record, and it's a rare thing for prospects to outperform it.

It's a good idea not to weigh positive interviews to heavily.