Share All sharing options for: Statements That Undermine Credibility 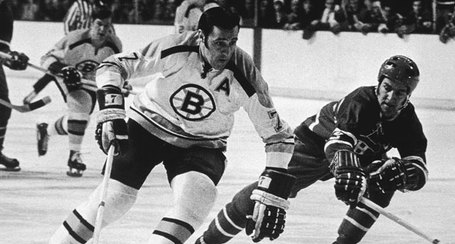 I went to the library a few days ago and decided to pick up a book that I've passed over a few times previously: Thunder and Lightning (a biography of Phil Esposito).  I've chosen to skip this particular volume before because I've read a fair bit about Esposito's work in hockey after his retirement, and very little of it was complimentary.  Since few humans want to relate an honest list of their faults, I rather expect this book to be something of a whitewash.  Imagine my thoughts than when I read this on the first page of the preface (written by Esposito's co-author, Peter Golenbock):

[Esposito] could have spent half this book writing about his many accomplishments on the ice.  And he would have been justified.  Esposito was the greatest center ever to perform in the National Hockey League.  A hulking presence, he would plant himself in front of the goal, wait for a shot or a pass, then muscle defenders out of the way as he wristed the puck into the net.  The image of Esposito lodged in front of the net waiting to strike, endures like that of Bobby Orr charging up the ice or Wayne Gretzky stiockhandling around a defender.  Phil is the standard by which all other centers are measured.

For a book that bills itself as "A No B-S Hockey Memoir", that's a remarkable first page.