Share All sharing options for: Faith and Sample Size 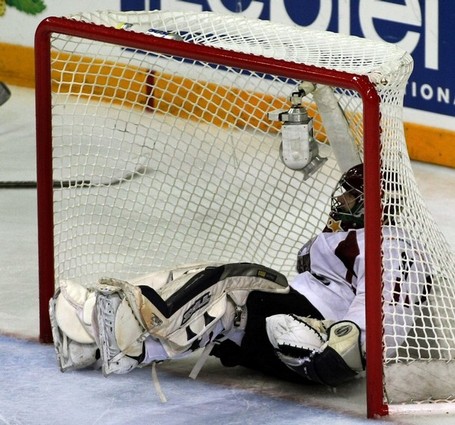 At every single Olympics, World Championships, or World Junior tournament, it seems like ther's a goaltender from some tiny country who comes up huge.  Belarus and Slovenia likely come to mind, but Latvia's done it a time or two as well.  It used to be that Arturs Irbe was the goaltender who did it (although unlike most of them he was quite a decent NHL netminder too), but it's a different Latvian goaltender this year.

Edgars Masalskis (pictured) is not a familiar name in North America (despite this very cool unofficial website), but he's the goaltender helping to propel his country of just over 2,000,000 people through this year's IIHF world championships.  Latvia's played four good games, losing 4-2 to the US before beating Sweden (3-2), Austria (2-0) and Switzerland (2-1).  Masalskis has played in all four games, posting great numbers:

The Latvians feature a handful of NHL or ex-NHL role players (Karlis Skrastins, Martin Karsums, Janis Sprukts, Herb Vasiljevs) but they wouldn't be playing competitive games against Sweden, Switzerland and the United States without outstanding goaltending from Masalskis.  He's done it before, too; last year he posted a .910 SV% at the World Championships and he's had previous moments of triumph.

However, he really isn't that good of a goaltender in the grand scheme of things; he put up lousy numbers in the DEL (Germany's top league) this past season and has bounced around the Belarus League, the Oberliga, the 1.liga, the Extraliga, the Latvian League and the East European League over the past five years.  Twice now he's put up great numbers for his country at the World Championships, though.

It just happens, and I think the hockey community as a whole needs to start putting less stock in tests like the World Championships that are so brief; the World Juniors, the Olympics, and perhaps most pivotally: single playoff rounds.