The Rather Surprising Shootout Specialist...

Share All sharing options for: The Rather Surprising Shootout Specialist... 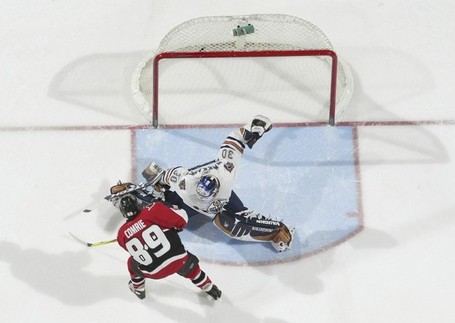 Seventeen players currently on the Oilers roster have participated in an NHL shootout.  Six of them have failed to score a goal (Gilbert Brule has the worst mark at 0-for-4), but eleven others have.  The leader may surprise you (he certainly did me):

This really isn't rocket science; if I were a coach I'd practice it a dozen times a year and keep track, and whoever did the best in practice would be used in game situations.  As it stands (assuming Kotalik is kept) next year I would run Kotalik, Horcoff and Nilsson as my three shooters, with Pisani and O'Sullivan as alternates.

The shootout is a completely different competition than the actual game, so it makes little sense to keep running out skill players (Hemsky, Gagner) who aren't experiencing success.

Also, I'm guessing that Jason Strudwick's goal occurred during that marathon game while he was Ranger (the one where Marek Malik scored this beauty).