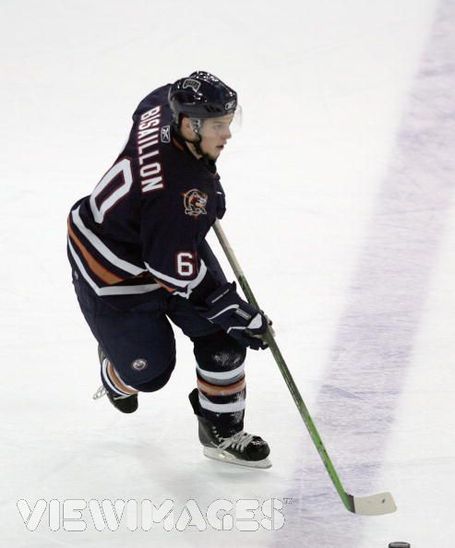 The Stockton Thunder lost game two of their series with Las Vegas last night; meaning that the series is knotted at one game a piece heading back to Stockton.  Parker Van Buskirk played his sixth consecutive game, making twenty-six saves in a 4-2 loss.  Still, that wasn't the part of the game that grabbed my attention.

What grabbed my attention was this paragraph from the game recap:

There are two things there worth noting from an Oilers' perspective, one of them good and one of them very bad.

The good item, obviously, is that Andrew Perugini has been taken off of IR and is now listed as day-to-day.  He's far and away the best goaltender on Stockton's roster (and likely the best goaltender in the series) and if he's able to return it could make a huge difference in the final outcome.

The bad item is very bad; Sebastien Bisaillon being healthy-scratched in a playoff game.  It was two seasons ago that Bisaillon got a taste of NHL action as an emergency call-up, and it's been largely downhill since then.  Bisaillon's undersized but has a top-end offensive game (in 2005-06, he scored 35 goals and 71 points in junior) and at one point looked like a prospect of interest.

Last season he spent most of the year in the AHL (and scored 4 goals in his 7 ECHL games), but suffered a career threatening injury when "an opposing player accidentally stepped on the back of his leg and sliced him to the bone severing several tendons and ligaments in the process."  He made a remarkable recovery, even appearing in a handful of games to end the season.

This year, he split time in the ECHL and AHL nearly equally, and has played only three playoff games this spring, recording 1 assist and going -3.  The coach has leaned on players like Robbie Bina in his place, and it's almost safe at this point to write him off as an NHL prospect.