Share All sharing options for: Kevin Prendergast Vs. Ryan O'Marra 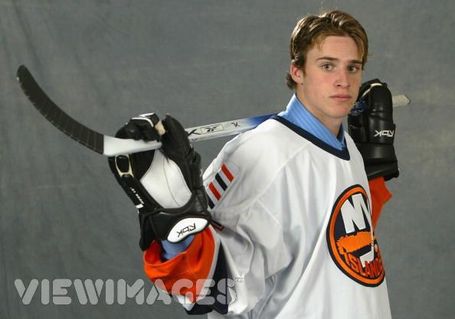 Ryan O'Marra had a forgettable year, and that's putting it kindly.  Kevin Prendergast made it crystal clear what the organization's view of O'Marra's season was in an interview with the Pipeline Show the other day:

"He’s been a disappointment... the talent’s there, that’s the frustrating part about it."

That may not sound like a damning quote, but from Kevin Prendergast it's downright shocking - in the same interview he called Vyacheslav Trukhno a "blue-chip prospect" (he had seven goals and twenty six points in the AHL this season) and he got more negative as the interview went on:

"He’s a thinker, and I think part of Ryan’s problem is that he’s too much of a thinker."

"We think there’s a future there, it doesn’t look good at this point but we have to exhaust every avenue."

These are not positive comments on a former first-round draft pick, particularly since they come from a man who a) never met a prospect he didn't like and b) is in charge (for now) of the development side of the Edmonton Oilers system.  But according to Prendergast it wasn't an issue of ability ("he’s got the ability to be a really good hockey player") but rather of attitude; he returned to the same point of contention repeatedly during the interview - Ryan O'Marra doesn't want to be a shut-down centre:

"For some reason he’s bucked [being a third line centre] a little bit."

"It was just a point of him buying in to being that third line shutdown guy."

Of course it wasn't like O'Marra spent most of the season being fitted out for that third line role; Tim Sestito centred the checking unit to start the year and Ryan O'Marra was put on the fourth line - a deserved assignment, based on his play last season.  O'Marra may not have liked it, but he's going to have to work at that defensive role; and it doesn't sound like the organization pulled any punches in explaining it to him:

"It was put to him in no uncertain terms what we expect for next year and that there is a spot for him if he understands that’s going to be the role and he can play that role."

That Smyth deal just looks better all the time, doesn't it?  Of course, none of this is much different than what was said last summer: there were "rumours of tension" between O'Marra and the Oilers and the team had him slated to be a shut-down guy.  What I said then is equally true today:

"The thing with O’Marra is that he does things that are overvalued: he has nice size, and throws big hits, and every so often looks like he could be a scorer. He has yet to show any ability to be a better shutdown player than, say, Tim Sestito, and is basically getting cut slack because of his draft pedigree. Beyond his size and that draft pedigree, there isn’t much reason to be optimistic about this player."

It isn't over, but don't hould your breath.