The Return of Tony Hrkac

Share All sharing options for: The Return of Tony Hrkac 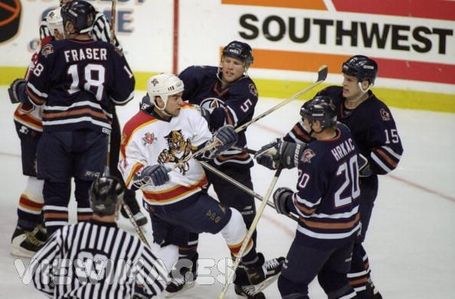 This is a fun picture for me; unlike those lucky folks a couple of years older than me, I didn't grow up following Gretzky & Co., I grew up watching the late-90's Oilers.  The Florida Panthers forward pushing with Tony Hrkac is Steve Washburn, #5 for the Oilers is Greg De Vries, and I'm relatively certain that #15 is Drake Berehowsky.

Tony Hrkac played 36 glorious games for the Oilers during the 1997-98 season; it was quite the comeback for him.  He jumped directly into the NHL after recording 116 points in only 48 games for the University of North Dakota as a 20-year old (other player of note on that team: Ed Belfour).  Hrkac played the next five seasons in the NHL but ended up in the minors for the five seasons after that.  He was recalled by Dallas and eventually waived; the Oilers claimed him and he scored 8 goals and 19 points in those 36 games with the team.  He bounced around in the summer (Edmonton traded him to Pittsburgh to bring in Josef Beranek, Nashville grabbed him in the expansion draft and then traded him back to Dallas) but played the entire season with the Dallas Stars - helping to sweep Edmonton in the first round and beat the Buffalo Sabres in six games to win the Stanley Cup.  He closed out his NHL career in Atlanta and played two seasons for the AHL's Milwaukee Admirals before ending his playing career in 2005 at the age of 38.

At least, that was when he appeared to end his career.  Back in March he left his post as Concordia University's coach to try and come back with the Houston Aeros for one more season.  He managed four points in twelve games to close out the season, but five games into the playoffs he's scoring at a point-per-game pace.