Share All sharing options for: Damn You, Puck Daddy 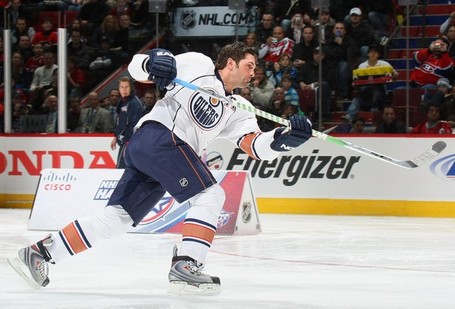 It's one thing for the NHL to ignore Sheldon Souray when it names the three finalists for the Norris Trophy, but Greg Wyshynski goes one step further in his blog entry today.

He makes a list of the folks omitted from awards; presumably the list of the next-best defensemen in the league:

Notice a name missing from that list?  The name of that hard-shooting, Craig Wellar-destroying defenseman on the Edmonton Oilers, perhaps?  I was fairly 'meh' on Souray in the summer, but his season was incredible.  Consider:

None of this is to say that Souray's going to be worth his contract over its duration, or even be able to repeat this season, but he had an incredible year.  Certainly better than Mark Streit's.