The Career of Jonas Gustavsson

Share All sharing options for: The Career of Jonas Gustavsson 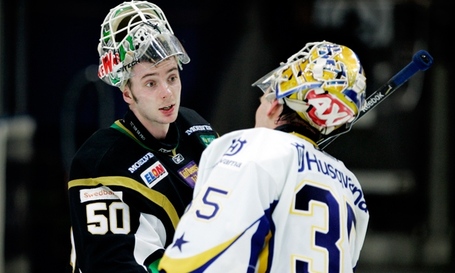 In Kevin Prendergast's hour long interview with Dean Millard and Guy Flaming of The Pipeline Show, one of the names that came up was Jonas Gustavsson's.  Gustavsson is one (if not the) biggest name in this year's crop of undrafted European players.

He's 24 years old, stands 6'3", posted incredible numbers in the regular season and then bested them in the playoffs en route to winning the league championship over HV71 in five games. He's also most definitely a player of interest for the Edmonton Oilers.  Here are his numbers in the Elitserien and Allsvenskan (the best and 2nd best Swedish leagues) over his career:

In thirteen playoff games, Gustavsson posted a 1.03 GAA and .961 SV%; elite numbers in any league.  The worry here, obviously, is that he hasn't had prolonged success, but then again he is still awfully young.  The question that needs asking is what role Gustavsson would be asked to fill - Dwayne Roloson's or Jeff Deslauriers'?  I'm not at all a fan of Gustavsson/Deslauriers as the tandem out of the gate, but I'd be very happy to see Gustavsson play as a 1A/1B goaltender with a reliable partner.  This isn't an opportunity the Oilers should pass on; certainly not for the sake of Jeff Deslauriers' potential.