Share All sharing options for: We Meet Again, Glenn Fisher 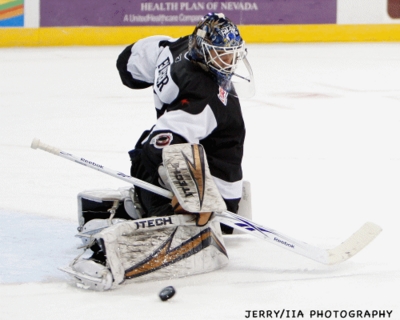 The Stockton Thunder defeated the Ontario Reign last night to advance to the second round of the ECHL playoffs. At the same time, Glenn Fisher and the Las Vegas Wranglers knocked off the Bakersfield Condors (and famed goaltender Yutaka Fukufuji) in their seventh game, which means that Stockton and Las Vegas will meet in the second round.

Fisher actually played with the Thunder earlier in the season, winning two of three games. He had a bad season last year in the ECHL, and so with two goalies already in Stockton (Pitton and Perugini) the Oilers sent him to the Calgary Flames' ECHL team in Las Vegas. He's split time with John DeCaro throughout the playoffs (the Wranglers' coach declined to pick a designated starter and instead alternated between the two), but has been the better of the two goaltenders:

Either way, that combination has been substantially better than what the Thunder have had in net since Andrew Perugini went down midway through game one:

If Andrew Perugini isn't healthy in time for round two, Stockton's going to have a healthy goaltending disadvantage - although it should be noted that the Wranglers play a stingy defensive style which inflates goaltender save percentages, while Stockton does, well, the opposite.