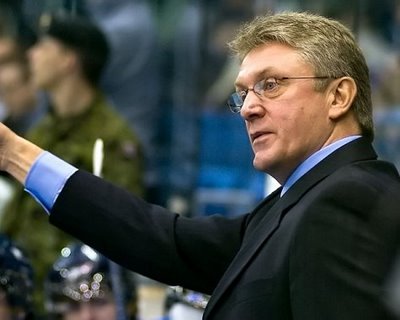 Lorne Molleken is the coach and general manager of the Saskatoon Blades of the WHL.  His teams are generally described as "lunch-bucket", "blue-collar", and "hard to play against".  If those sound like euphemisms, it seems that occasionally they are.

Take, for example, the incident that occured between Molleken and Washington Capitals general manager George McPhee in September of 1999.  The Capitals were playing an exhibition match against Molleken's Chicago Blackhawks in Columbus - it was a season before the Blue Jackets would begin operations, and so the NHL had arranged to have preseason games played in the city.

The Blackhawks were a tough team, and in their first preseason game (against St.Louis) Molleken dressed "eight players who have built their careers primarily by beating people up. "  There were five fights in that first game.  In the second game, against Washington, Molleken dressed seven players of that general description - Washington was so concerned that they scratched Adam Oates and Peter Bondra, both of whom had been slated to play.  There were five fights in that game too, and Dave Manson cross-checked Steve Konowalchuk in the head.

Molleken's reaction?  "We want to play to our strengths.  Sure, we'll use our toughness."

McPhee was less impressed, so he went down to the Chicago locker room to talk things over with Molleken.  McPhee said that the conversation started in "a civil manner", but however it started it ended with McPhee attacking Molleken, leaving the Chicago coach with a black eye and a lump on the side of his head.  Chicago players came to Molleken's defense, bloodying McPhee's face and ripping his suit.

Molleken's painted quite blackly in an article by Sports Illustrated's Kostya Kennedy:

Molleken, who replaced the fired Dirk Graham behind Chicago's bench seven months ago, established his propensity for gratuitous bloodshed on March 12 in his seventh game as coach. In the last minute of a game against the Predators, Molleken sent a band of barbarians -- forwards Bob Probert and Reid Simpson and defensemen Dave Manson and Brad Brown -- onto the ice in an unsuccessful effort to goad Nashville players into a brawl.

Molleken's NHL stint was short; he was officially a head coach for only 47 games, although after a disappointing start to 1999-2000 he wasn't fired, just demoted while Bob Pulford was named the head coach.  Despite the official demotion, Molleken remained the team's primary coach for the rest of the season.

Molleken's been an assistant coach in Chicago, San Jose and Pittsburgh and he's spent a decade as a head coach in the WHL, generally with success.  He's been both the general manager and the head coach of the Saskatoon Blades for the last few years; this past year the team went 49-18-3-2 and scored 88 more goals than they allowed (Oilers prospect Milan Kytnar was a key player on this team).  They were upset in seven games in the first round of the WHL playoffs.

Molleken has ties with the Oilers' organization; before being hired by Chicago, he was the head coach of the Oilers' farm team for three seasons (first in Cape Breton and then in Hamilton).  He took the Hamilton Bulldogs to the Calder Cup finals in 1997.

Why all this history on Molleken?  Because although Molleken has refused to comment, he has been rumoured as a possible successor to Craig MacTavish behind the Oilers bench.  I've got mixed feelings about that - on the one hand he's obviously a very capable coach, but on the other hand he's shown an alarming willingness to make use of less than savoury tactics to get the job done.  He may very well be the best candidate for a certain form of "aggressive" hockey; if he is hired, that will be a big tell as to what direction Steve Tambellini wants to take this franchise in.