Share All sharing options for: Bigger Fish to Fry 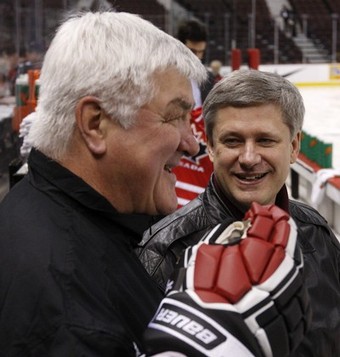 "You let things settle. I have great respect for coaches (like Craig MacTavish). The (NHL) coaching job, sometimes you wonder. Since I was let go in Toronto, there's been 20 coaching changes. Sometimes you think, 'What kind of job is that?' " But once a coach always a coach.

"The opportunity to get back in -- in either avenue -- is attractive. I've done both (coach and GM) and enjoyed both," said Quinn.

That sounds a lot to me like a man who is hedging his bets. When asked about the Minnesota job, Quinn's preferred destination was readily apparent:

"I've been going into Minnesota since I was a young man to play back in the North Star days, and over the years, I've gained lots of friendships ... in the area, and obviously my daughter's settled there," said Quinn, 66. "But the reason I'm interested the most is the passion for the game of hockey from the fans and the community. ... It's just a great hockey market."

I'm sure I'd feel the same way in Quinn's position; even ignoring his age the chance to be the architect of the entire team rather than just one more tool in the hands of an ambitious G.M. must be appealing.  The Russo article that quote was taken from mentioned a few other possibilities, from the comically bad (Doug MacLean, Pierre McGuire) to the usual suspects (Jay Feaster, Rick Dudley, Neil Smith) along with some up-and-comers.  Since I linked to the article, I can't resist the Doug MacLean quote:

"When I see 14 of my guys playing so well in Columbus, it excites me to get back in," said MacLean, who is friendly with Leipold. "Everybody wants a second chance as a GM. There's a great foundation in Columbus, and I feel really proud of that. Now that Minnesota's an established team, and we all know how amazing a hockey market it is, anybody would want a chance at that."

Of course, what MacLean neglects to mention is that his 14 guys who are playing so well are playing in the playoffs, something he has no familiarity with as a G.M. despite being given over nine years in the position.  Still, as a fan of the Oilers, I say let bygones be bygones; I'd love to see Doug MacLean as the G.M. of the Minnesota Wild.