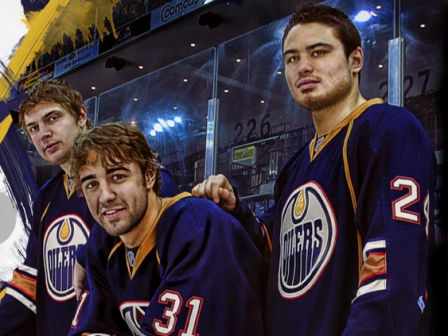 This poster is from a promotion Stockton did earlier in the season; each Thunder player wore an Oilers jersey for two home games, jerseys that were subsequently auctioned off. The players pictured (left to right) are David Rohlfs, Bryan Pitton, and Garet Hunt. Bryan Pitton's career prospects have fallen off badly with a disappointing ECHL season.

Undrafted free agent Andrew Perugini passed him early in the season, but when Perugini went down with an injury midway through game one of the ECHL playoffs, Pitton had a chance to prove himself. He hung on to win in game one, but then faltered badly and lost games two and three.

With Perugini injured, the Falcons signed another undrafted free agent, Patrick Van Buskirk of the Kitchener Rangers, as an emergency backup to Pitton. Van Buskirk started and won in tonight's game, tying the series with the Ontario (Calif.) Reign up at two games a piece. He wasn't great, but he wasn't any worse than Pitton. It's his first professional season, but for the second time in three years Bryan Pitton has been a below-average goaltender. I think he's played his way out of the organization's plans.