"In Any Other City, Craig MacTavish Would Have Been Fired Years Ago"

Share All sharing options for: "In Any Other City, Craig MacTavish Would Have Been Fired Years Ago" 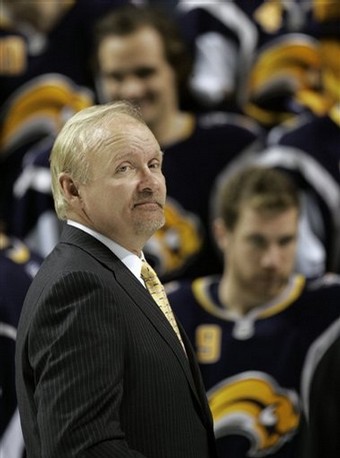 Given that Craig MacTavish started coaching in 2000-01, let's do a quick comparison between his career numbers and those of Lindy Ruff over the same span.

Ruff's numbers are slightly better in both categories, but the difference isn't large at all (EDIT: As pointed out in the comments section below, my initial math was off, and that does somewhat undermine the premise of this post.  The math has been corrected, and I do maintain that MacTavish and Ruff (accounting for circumstance) are similarly talented coachs; I do however acknowledge that the new numbers make it less apparent). The Oilers hung on to MacTavish for a very reasonable amount of time; prior to the lockout he struggled to carve out some success with a small market roster (much as Ruff did) and after the lockout he went on a great Stanley Cup run and did two seasons with a rebuilding team. Only this year did it seem that Craig MacTavish was more a part of the problem than the solution.

Despite what many fans in Edmonton think, MacTavish is an excellent career coach and will most certainly get another shot at the NHL level.  His time had come in Edmonton, and that will happen.  But it's one thing to complain about this past season (Which was a poor one by his standards) and it's quite another to complain about his whole tenure.