Something Worth Knowing About The Springfield Falcons

Share All sharing options for: Something Worth Knowing About The Springfield Falcons 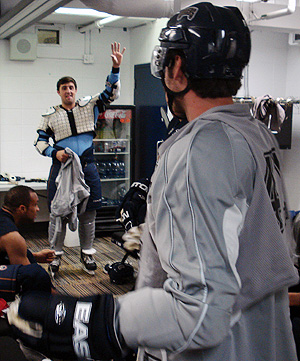 There's really quite a bit more to the Springfield Falcons' season than appears on the AHL standings page.  The two players in this picture figured prominently on the Falcon's blueline; in the foreground is Taylor Chorney, the highly-touted rookie professional who has twice represented the United States at the U20 World Juniors, and in the background is Cody Wild, another rookie pro who struggled to stay in the lineup under former head coach Jeff Truitt.

Rob Daum made more use of Wild, and Wild put in at least a passable performance as an AHL rookie; certainly a better performance than Taylor Chorney's although Chorney had no trouble staying in the lineup and even made his NHL debut in a pair of meaningless games to end the season.  It seems reasonable to say that Chorney, the 36th overall pick in the 2005 draft, is an organizational priority while Wild, a 5th round pick in 2006, is something of an afterthought.

Afterthought or no, Wild was the best defenseman on the Falcons by the end of the season.  Take a quick look at their defense corps from the final game of the year:

I suppose the next logical question is why was the blueline so depleted?  Taylor Chorney and Theo Peckham were in the NHL while Jake Taylor and Mathieu Roy were injured.  Other callups (Robbie Bina, Sebastien Bisaillon) were helping Stockton make the playoffs, and I'd guess the Oilers decided there was no sense calling them up.

I go into the details on this to illustrate how desperate the injury situation in Stockton got towards the end of the year.  Frankly, I think Kevin Prendergast should have made different decisions (although Guy Flaming does a good job explaining some of the problems) so I'm not pointing this out ot exhonerate him.  Rather, I'm showing that much of the improvement made under Rob Daum was obscured by things beyond his control.  The defense was a skeleton crew by the end of the year, but he had to deal with a ton of injuries to forwards as well (as did Truitt, albeit to a lesser extent).

In other words, while it is likely fair to judge Kevin Prendergast on the team's performance this season, the struggles of the team under Rob Daum are not enough to either condemn him or exhonerate his predecessor, Jeff Truitt.