Share All sharing options for: Those Meddling Upper Managers 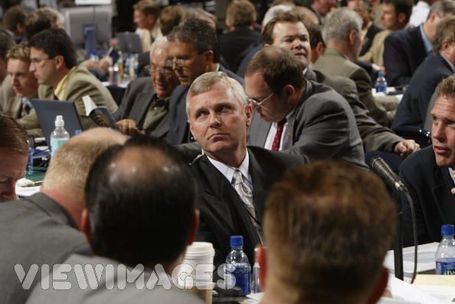 The departure of Craig MacTavish was the key focus of Steve Tambellini's press conference the other day, but it was far from the only topic covered.  Here's what I said at 12:17 of my live blog the other day:

Tambellini identified scouting and development as areas where there is "a lot of work to do", and rather heavily implied there will be changes.  Don’t get too comfortable, Kevin Prendergast.

Prendergast (pictured above) has been with the Oilers organization for 18 seasons now, and is presently the Assistant General Manager of the team, and the guy responsible for handling the Oiler's AHL affiliate.

Guy Flaming has a must-read piece on the Oilers' drafting history under Prendergast; it's quite lengthy and well worth the read, but a few points stood out ot me, and I'm going to focus quickly on them.  The first point is about the Hemsky selection; a selection that Prendergast made based on recommendations from his staff rather than his own feelings:

The truth of the matter is that during the 2000-01 season, Prendergast saw Hemsky several times but never on a night when the import played well. Yet at the draft table he was able to set his own ego aside and instead put faith in the staff that he had assembled and subsequently made the right selection. Ales Hemsky would not be an Oiler today if not for Prendergast.

This gives us some interesting insight into Prendergast; many people would let their own feelings guide their actions rather than trusting their people.  Prendergast didn't, and it was the right decision.

Flaming continues, but from the 2002 draft on there's a rather noticeable pattern.  In 2002, Kevin Lowe wanted a goaltender, and he wanted character and grit.  Prendergast and Co. delivered Greene and Stoll as the grit players, and when they were told to select a goaltender they took the one they liked best, Jeff Deslauriers.

I'm going to quote from what Flaming says about the 2003 draft:

The Oilers were not sold on drafting Parise because the upper management didn’t want to add a diminutive forward to a team that was already too small for the pre-lockout NHL. Hindsight tells us that was obviously a mistake but it was an organizational decision to get bigger, not a policy made by the scouting staff.

That paragraph should be alarming to Oilers fans, because we may very well be at the point where that policy is going to be re-introduced.  Everyone, from fans to the media to the G.M. says the Oilers are too small, and many think that part of the problem is this team's drafting.  Well, in 2003 they thought the same way, and they made it an organizational policy to draft big players.  They got serviceable guys in Marc Pouliot and J-F Jacques, but as a result they passed on a player who has already scored more than thirty goals three times in his four season long career; a guy who hit forty goals this season.

In 2004, according to Flaming again upper management dictated that a goaltender be selected.  The scouts took Devan Dubnyk over highly-touted Marek Schwarz; a good decision, although Cory Schneider was still on the board.

Now, I'm not as adamant as Flaming that Prendergast isn't a big part of the problem; I think his performance putting Springfield's roster together over the past two seasons is fairly damning if he had free rein.  On the other hand, if what Flaming says is true (and there's no reason to believe it isn't), then the biggest problem at the draft table over the past eight years hasn't been Kevin Prendergast, it's been the man who ultimately steered this franchise to where it is today: