Share All sharing options for: Springfield Falcons Quality of Competition 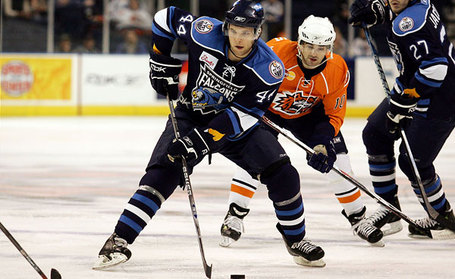 Back in December, I had something resembling a stroke of genius, when I hit upon a method for measuring the quality of competition that the Oilers’ AHL prospects face.  My idea was relatively simple, and it started with the official AHL website, every time a goal is scored, the names of every player on the ice for both teams are recorded.

What I decided to do was rate each forward using a simple metric: points per game.  I’ve fiddled with the rankings since then, and settled on these levels:

Since most coaches match both their forwards and defensemen against the opposition team’s forwards, I decided not to bother rating the defensemen.

Dale Weiss scored, with Patrick Rissmiller and Mark Bell as his linemates.  Dale Weiss is regarded as a 3rd-line player (23 points in 74 games), Bell as a 2nd-liner (31 points in 74 games) and Rissmiller as a 1st-liner (54 points in 64 games).  Thus, each Springfield Falcon player on the ice for that goal was scored 1/1/1/0 – a point for each 1st, 2nd, 3rd and 4th line player on the ice (three "events" total).  Here’s the raw data for each player with at least 21 events in the second-half of the season:

Next, I needed to convert this raw data into some kind of number.  I decided to reduce things to the simplest possible formula; for each event against a certain level of player, they’d get a certain number of points.  Those points would then be divided by the total number of events.  Points are awarded as so: 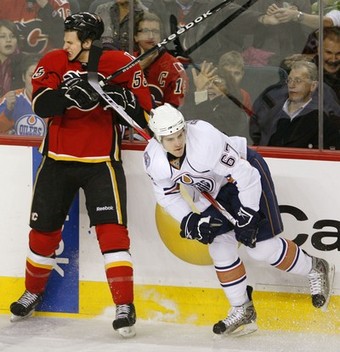 The last, and most difficult task, is to add these totals together with the data from the first half of the season.  What I had planned to do was just take the raw data from both halves of the season, add them together, and then compute the total difficulty of the player’s minutes.  Unfortunately, I never published the raw data from the first half, and my hard drive crashed, leaving me high and dry (as I didn’t have the data backed up).  With that in mind, I’m going to combine the data using an approximation – I’m going to multiply the total games played by each player by their competition rating in each half, add them together, and then divide them by their total games played in the AHL season.  The formula will look like this:

It won’t be perfect, but it should put us very close to the actual number.  Here then is the final quality of competition ranking on the season, by position (with plus/minus in brackets along side):

What To Take From This

This is hardly definitive but it does give us a relatively accurate view of Quality of Competition (according to Vic Ferrari of IOF, it’s roughly a .92 correlation to Behind the Net).  So with that in mind, there are a few things that I think are worth noting: 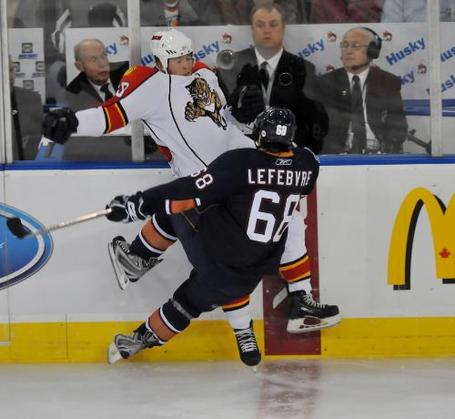