A look at Anton Lander

Share All sharing options for: A look at Anton Lander

With the junior world cup around the corner, I thought I'd take a closer look at the two Swedish prospects selected by the Oilers in last years draft. Starting today with Anton Lander

Edmonton landed him in the 2nd round (40th overall) in what might turn out to be quite the steal. Having debuted in the Swedish Elite League at just 16, he's already in his 3rd season playing against men.
So what did the scouts say about him before draft? Here's some of the quotes:

"A very smart two-way player with excellent hockey sense. Lander reads the game well and makes mature decisions with and without the puck. Plays with some intensity, but his skating needs some improvement. Is a capable playmaker that protects the puck very well and usually comes out with the puck from the corners and along the boards. Defensively aware and with leadership skills"
Bob McKenzie:
"Lander is a two-way checking forward with excellent outside speed. He can make plays at full speed and controls the puck with a lot of confidence. A very unselfish player, Lander is always aware of where his teammates are and makes good crisp passes. He is a hard working forechecker, keeping his feet moving all the time. With a strong quick release wrist shot, he often uses d-men as a screen off the offensive rush. Lander drives the net hard with and without the puck and doesn’t quit on the puck until the whistle goes. Reliable and disciplined, he brings a consistent effort to the rink every game and always improves his team’s chances of winning a game. Will adapt and play any role given by coach."
So what about this season?
Statistics so far:
If you just look at the numbers, maybe they're not that impressive. But bear in mind that Timrå as a team is -11 and have had a tough, injury riddled season so far.Last season he had 10 points in 47 games, so barring an injury he's easily topping that. He is the kind of player that does all the little things that doesn't show up in the stat sheets.As the scouts pointed out he's a natural leader with poise beyond his years, something that was proven when he was named an assistant captain at the age of 18, which is basically unheard of. He's one of the leaders on the team in playing time, even pulling double-shifts. Partly as a result of Timrå being hit with the same injury-bug that's plaguing our beloved Oilers, but still it's impressive that he's been given so much responsibility at such a young age.
One of the numbers that really stands out in my mind on that statline is the 2 game winning goals that came in back to back games when Timrå was in danger of really  falling behind in the league, the guy was simply clutch. And that's one of the things I really like about his style of play. This is a guy who won't take any shifts off, he gives you his all every game, and he plays smart, always with the good of the team as his first priority.
Offensively he's improving, he's never gonna score 40 goals or tally up any high point totals but he's a good passer, does crash the net hard and is a hard worker on the boards and in the corners. He's also a decent face off taker, and in the games that I watched his percentage was actually higher in pressure situations, once again showing that he rises to the occasion. Something that is rare in swedish athletes, who otherwise almost has made an art out of choking when it really matters.
Where Lander really excels is on defense and on the forecheck. He's an aggressive forechecker, plays smart and works hard on the backcheck. He's almost always in the right position and is becoming more comfortable at directing others. He's also one of the most used players in box play. 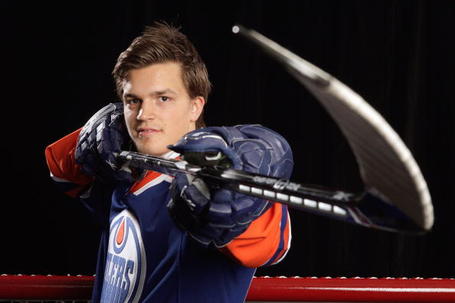 What it all boils down to is that Anton may not be one of the the most offensively skilled players, but what he lacks in skill he more than makes up for in hockey IQ and work ethic. The guy is simply a HOCKEYPLAYER, a guy that does all the little things and is team first. He might not become a top 6 player, but he definitely has the makings of a solid NHLer. But he really needs to work on speed and explosiveness, something he's improved upon but he still has a way to go.
Now how ready for the Oilers is he? Well we should get a measure of that in the junior WC, my guess is he'll be playing on the checking line and will get some good playing time against the top players.But in the long run he's probably best served staying at least another year in the SEL, and then being slowly worked into the organization.
My scouting on Lander is mostly based on the last few games, and I thought I'd get a second opinion from someone who's watched a whole lot more games. So I contacted Jimmy Hamrin who runs a really good Timrå blog for Sundsvalls tidning at http://blog.st.nu/tikare/. And he had a lot to say:
"Around the draft a lot of scouts and critics pointed to Anton's skating as his weakness. One club before the draft even said that he "looked like a fat boy on the ice." Anton was far from fat but had spent perhaps a bit too much time in the gym to measure up physically with the older players. Anton then spent  the whole summer losing weight and working on his explosiveness. I myself was a witness to him skating around alone in the afternoons on inlines out in the middle of summer heat and running the start and stop, and other various exercises. Early in the preseason I checked out a lot of practices and it was clear that his speed and effort had improved. But his role on the team was still uncertain and he began the season as a forward on the 4th line. The club has had a tough season and remained at the bottom of the SEL, but Anton has been the one whose really pushed his teammates and shown the most heart. In a vote on the Internet among fans on who they thought was the best forward he won by a landslide (he got 40% and 2nd place Daniel Corso had 15% of the votes). He is also the one who's shown the most frustration with the results, both through body language and comments in the media.


Looking at him in terms of skill there is a lot of things to work on before he is ready to go into the NHL. The speed has improved but there is still more work to do, he has difficulty separating from defenders and taking it to the net. Therefore he has a tendency to end up a bit too much out in the corners. He could also improve in the terms of goals and assists and he can become stronger in the Faceoff Circle.

His strengths, in addition to the mental and leadership on the ice is that he has a strong body and very good balance. There aren't that many defenders who can put him down around the boards. He's also a bit of a playmaker, he's able to be make the difficult passes and has, for his age, a good shot. I'm certain that this is a player who will end up in the NHL. In what role is still unclear. He might be a new Henrik Zetterberg or he might be a Samuel Påhlsson to use two extreme examples. I think Edmonton would benefit from having some patience with him and letting him develop his game here in Sweden for some years to see how he might fit in best and let the future tell what role he could take and not pigeonhole him too soon."

He's a mainstay on the Penalty Kill but also more and more on the Powerplay, and in the last 10-15 games he's gotten a lot of playing time, he plays roughly 20 minutes a game. He's also one of the teams leaders and is active on the bench, both encouraging and criticising the other players. Something he can do due to the hard work he puts in.

Personally I love the way Anton Lander plays hockey, I stated it before but it really needs to be said again: this kid really is a hockey player and is the kind of player Pat Quinn would love to coach. Hopefully he gets to shine in the juniors and the Oilers gives him the time to develop his game.
-Johan Barrander