Revenge of the minnows

Share All sharing options for: Revenge of the minnows 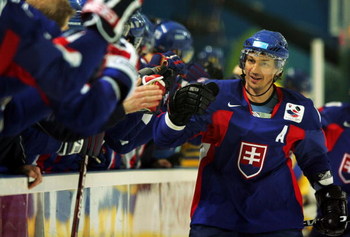 Derek's great story on Peter Bondra brought back some memories that should be bitter but are in truth rather sweet. Bondra was one hell of a player, I loved the guy even when he was driving a stake through my heart. This happened twice in 2002. There was Derek's called shot hat trick against my Oilers, and then a few weeks later Bondra was the principle assassin as Slovakia knocked Canada out of the World Championships. That's a story in itself. It is without a doubt my favourite Canadian loss ever, as it was the first chapter in one of the greatest underdog stories in hockey history.

The bloodless revolution which should have set an example around the world -- one of the amicable divorcees installed a playwright as its president, for goodness' sake -- nonetheless seemed at the time to be a death blow to the competitiveness of the former hockey power, Czechoslovakia.  Instead, both sides emerged as forces still to be reckoned with.  It took the Czechs about five years to recover, then go on an unprecedented roll which saw them win the Olympics, two consecutive world juniors, and three consecutive world senior championships around Y2K.

The Slovaks seemed by comparison to be on the wrong side of the tracks.  A tiny nation of ~5 million, they were shown zero respect, initially installed in C Pool in the worlds, then taking a gang reaming at the pleasure of the NHL, IOC, and IIHF in the winter Olympic games. At Salt Lake City earlier that winter, the "Big 6" got a bye into the second round and essentially right on into the medal since all 8 second round teams made it. Meanwhile Slovakia had to qualify among the hockey minnows for Round 2, and do so without their stars who weren't released from their NHL clubs in time. They lost their first two games before reinforcements arrived, and that was that, their Olympics were done. It was the royal shaft in about every manner imaginable, and one would imagine it was particularly hurtful to the Slovaks that they were treated in such a second class manner to the Czechs so soon after the Velvet Revolution. It was like the Czechs were treated like former Czechoslovaks and the Slovaks weren't, if you follow me.

Suddenly at the worlds, the shoe was on the other foot. As luck had it, many of the top Slovak stars either missed the NHL playoffs or got knocked out in the first round. While they still missed the likes of Zdeno Chara, Marian Hossa, and Pavol Demitra, every country could say the same about top stars either unable or unwilling to play. For example, the host Swedes were missing Peter Forsberg, Mats Sundin, and Daniel Alfredsson. Manager Peter Stastny had no trouble convincing the Slovak players who were available to show up, and they showed up on a mission. It was quite a line-up, particularly up front: the NHL's most underrated superstar, Peter Bondra; team captain and tournament leading scorer, ex-Oiler Miro Satan; deadly sniper and surprising playmaker Ziggy Palffy; proven two-way centres Josef Stumpel and Michal Handzus; rising talent Ladislav Nagy, Lubos Bartecko, Vladimir (Gesundheit) Orszagh and a couple of youngsters who hadn't (yet) crossed The Pond. The blueline corps was fairly solid but unspectacular, led by Richard Lintner and future Oiler Lubomir Visnovsky.  The goaltender was Jan Lasak who had ended the season in Nashville, and he played brilliantly.

I had the good fortune of seeing all three of Slovakia's sudden-death games on the tube, and it was riveting hockey. Thanks to the wonders of Youtube, game highlights are readily available from the Slovakian telecasts of the day, and are well worth the watch if you have a few minutes.

The first two feature the Slovakia-Canada game. Against a Canadian team that featured Oilers Ryan Smyth, Eric Brewer, Steve Staios, Mike Comrie, and Dan Cleary, the Slovaks dominated early, fell behind 2-0 against the flow of play, then started their comeback on a great individual effort by Bondra with one second to go in the second period (around 8:30 of the first video). Early in the third, Comrie took an undisciplined slashing penalty, and the awesome Slovak powerplay (Bondra, Palffy, and Satan were all in the top five in the NHL in PP goals that season) made him pay on a well-engineered goal by Satan. Before Canada could recover, Bondra was set up in the slot and buried an absolute rocket (around 1:45 of the second video). J-S Giguere played well, but he had no chance on the goals by these snipers. (Listen to the play-by-play guy, who cracks me up, seemingly mocking Giguere right after the 3-2 goal.) Once ahead, the Slovaks defended more effectively than Canada had done, although in the last two minutes the Canadians poured on the pressure, and Lasak absolutely robbed Comrie with a brilliant save to preserve the win. But it was a deserved win; the Slovaks were the better team on the day.

The Swedish game was much more one of those "team of destiny" type games.  Once again the Slovaks fell behind 2-0.  Late in the second period there was a frantic sequence where Orszagh pulled down a breaking Swede on a near-penalty-shot situation; the Swedes poured it on for the full two minutes of the PP with Lasak standing on his head, only to be caught on an odd-man rush when Orszagh came out of the box just in time to receive a head-man pass and go in and pick the top corner. 2-1, and the exuberance was absolutely sucked out of the Swedish fans.  The Swedes still appeared to be in control in the third, but took a late and deserved penalty for checking Satan from behind. Satan got his revenge with a tying PP goal just as the two minute announcement was being made.  The game went to OT with pulsating, end-to-end action, featuring a miraculous Cujo-on-Nieuwendyk type emergency save by Lasak. The damn satellite feed went down at that point, but came back in time for the shootout. Lasak remained unbeatable, with glove side, stick side, poke check, and five-hole saves; then-Oilers goalie Tommy Salo made two fine stops on low shots before Palffy and Lintner buried a couple under the crossbar to put it away.

The final featured another hockey giant, Russia. Like the Slovaks, they too had pulled off what could be considered (at least on paper) two huge upsets.  The Russians had only three active NHLers, and a handful of formers, including captain and another ex-Oiler, Andrei (In the Tank) Kovalenko.  Although history said otherwise, Slovakia could clearly be considered the favourites based on (known) talent. They quickly jumped into a first-minute lead which they stretched to 2-0, then 3-1 on goals by Visnosky, Bondra, and Satan.  They missed some great chances to make it a three-goal lead, then came out for the third period very nervous, looking very much like a team unaccustomed to playing with a lead.  They stayed back in their own end, content to shoot the puck out if they could, doing nothing offensively, falling and diving around with hero plays rather than playing the type of hockey that got them there.  Sure enough, the Russians got a couple to tie it up and it looked like the Slovakian dream might come crashing down in humiliating fashion.  Instead, with under two minutes left, Palffy broke out with the puck and wisely fed Bondra, who calmly fired a sniper's bullet in off the post.  It was only the second shot of the period for the Slovaks, but it was the telling blow in a game that was more tense than it was wide-open exciting. For Bondra it was his 7th goal and 3rd game-winner, and raised his plus-minus to +12 (he was on the ice for 12 goals for and zero goals against); all were tournament highs.

Bondra's winner occurs around the 2:10 mark of the embedded clip, although the entire 6-minute video should be required watching for anybody who poohpoohs the World Senior Men's Hockey Championships as unimportant. Seeing the bedlam in Bratislava's Main Square in the immediate aftermath of Bondra's snipe with 100 seconds remaining in the Gold Medal Game is enough even all these years later to bring a tear to the eye of this sentimental old fool. And I'm not even Slovakian.

As the clock wound down, the joy of the Slovaks was great to see.  They'd gotten some breaks along the way, but surely they'd earned a couple over the years, and when the situation presented itself, they took advantage.  To see them bellowing the Slovakian anthem (the beautiful "second half" of the old Czechoslovak hymn that we once heard fairly frequently) was a wonderful sight if not sound.

For your added viewing pleasure check out this clip of the post-game celebration, highlighted around the 42-second mark when Lubo Visnovsky literally bounds into the room wearing a grin to light up the world.

Canada's quarter final loss was an anticlimax to an Olympian season, and just a momentary setback in a series of triumphs; the Red Maple Leaf would return to win the Worlds in both 2003 and 2004. That spring of 2002, though, was Slovakia's time to shine. Peter Bondra, who led the tournament in goals (7), game-winning goals (3) and plus (+12 by being on the ice for 12 goals for and zero goals against), shone the brightest of all. It was the crowning moment of a great career. 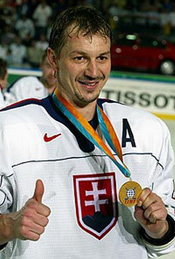