In which I called Bondra's shot. Alternative title - Thanks Tom Poti

Share All sharing options for: In which I called Bondra's shot. Alternative title - Thanks Tom Poti 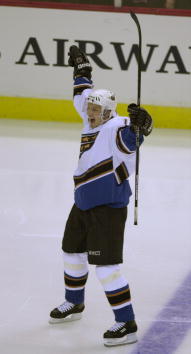 It was March of 2002.  The Edmonton Oilers were talking about the playoff race, but in reality they were desperately clinging to 9th place and floundering a bit.  I was on my way to Washington D.C. to see the Oilers face the Capitals, courtesy of Chris, a good friend of mine - the same friend that has turned me into a Caps fan when the Oilers fail to make the playoffs.  He scored some fantastic seats at the MCI Center, section 214 on the visitor's blueline, though great seats at the MCI Center weren't hard to get at that time - the place was sort of empty.

At the time, Tom Poti was in his fourth season as an Oiler, he was a flawed but promising young defender prone to the more-than-occasional mental gaffe.  He was also second on the Oilers in time on ice to Janne Niinimaa at 24:32 which gave him plenty of opportunities to have his nightly mental breakdown.  Think of Denis Grebeshkov's troubles in the first half of the season each year and you have a solid approximation of what Tom Poti brought to the Oilers at the time.  There were flashes of brilliance, but at the same time there were ghastly turnovers and missed assignments and he had begun to wear on me that spring.  I was tired of watching a game waiting for the HUA from Poti, and the worst part was that he never let me down.

Poti was playing left defense that year.  Peter Bondra was busy tallying up his eighth 30 goal season at right wing.  With that in mind, I boldly proclaimed to my Caps-fan friend "If Ron Wilson can get Bondra matched against Poti, Bondra is going to get himself a hat trick, you watch."  Off we went. 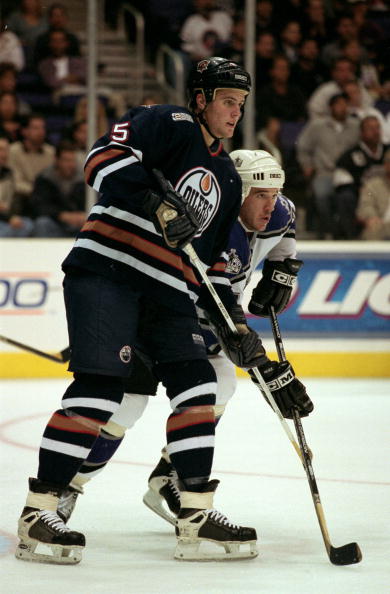 We arrived early because the Capitals staged an old-timers game featuring, for me at least, Rod Langway.  Langway was always a sentimental favorite of mine - he was as unsung as they came, a rock of a defender playing in a near-shinny league at that time.  He never much cared for offense, often failing to crack the forty shots mark, but when it came to shutting down the other team's best - few were ever as good as Rod Langway.  The old-timer's game was played sans helmets so Langway looked exactly as he ten years prior when he was skating his last season as a Capital.

The game started well for Edmonton, as Ken Klee attempted a hard-around a la Steve Staios and instead made a ghastly turnover to Mike Comrie right in front.  Comrie banged it home for a 1-0 lead.  The Oilers settled in and got physical.  Marchant, Moreau and Grier were disrupting the Caps' breakouts on the forecheck and in the neutral zone with extremely physical play.  There was a sequence early in the game when Marty Reasoner's line held the puck deep for almost 45 seconds and the Capitals didn't seem up to the task that day after Todd Marchant scored off of a secondary rush from the circle on a wrist shot off of a nice pass from Jochen Hecht.

The second period was an entirely different story.  The Caps came out with jump and Ron Wilson started putting Bondra out every time Poti touched the ice. Bondra's first goal was a one-timer from Adam Oates, Poti wasn't on the ice to be victimized. Bondra would fix that shortly thereafter.  About half-way through the period, Poti lost track and let Bondra slip behind him.  Glen Metropolit hit Bondra in stride and just like that the game was tied.

Bondra iced the game late in the third  as the Oilers were trying to tie the game.  Edmonton had it in the zone when the puck squirted in the air towards the left point.  Poti came pinching in, but it was the wrong decision.  I'd have to check with Chris to be sure, but I believe I said "Aw no, Poteeeeeeeeeeee!" as Poti started to pinch.  Bondra realized that the defensemen was coming in, beat him to the spot easily and pushed the puck around the oncoming Poti - off he went.  Poti couldn't stop and go the other way and ended up corkscrewing himself into the ice.  Niinimaa caught Bondra, but not in time to get himself into position before the hats came onto the ice.  Chris couldn't stop laughing - I called the Bondra hat trick and told him how it was going to happen.

Washington would go 9-6-1 over the last sixteen games, losing on the last night of the season to allow Montreal to squeak into eighth place and capture the final playoff spot.  Edmonton won the rematch five days later 4-1, and began their "usual" late-season charge, going 8-1-1 over the next ten games.  Unfortunately, they couldn't keep steaming and finished the last five games winning two and losing three.  They missed the playoffs by two points - the hated Canucks took eighth place - two points which were lost in Washington at the hands of Peter Bondra's hat trick, which your author saw coming from a mile away.

Tom Poti was traded nine days later.  He was sent to New York, along with Rem Murray, in exchange for Mike York.  I'd like to think it had something to do with that game, but I doubt it.  At least the Tom Poti Aggravation Experience had ended in Edmonton.