The Next General Manager of the Edmonton Oilers

Share All sharing options for: The Next General Manager of the Edmonton Oilers

I am Daryl Katz.  I'm a whale hunter.  Since purchasing the Oilers, my reign has been characterized by hunting down the biggest of the big whales in the NHL.  Marian Hossa, Jaromir Jagr, Dany Heatley, Nikolai Khabibulin - all names that light up the marquee, all names that sparkled in my eye.  If my OIlers should miss the playoffs again this year, I'll be put in a very precarious position - the fanbase will start to turn on my President and General Manager, and eventually, they'll turn on me.  I will have nothing to offer them but the promise of hope, but Kevin Lowe and Steve Tambellini won't be able to deliver for me.  I'll need to find someone else to run this team.  I don't try to hire anyone without first hiring the most famous name I can find.  I'll need a whale of enormous proportions.  Someone that the fanbase would consider a hero, a hockey hero.  Someone that can once again deliver the promise of hope to the people of Alberta.   A whale that can bring the hope of the past glories back to the Oilers.  Someone that can guarantee fan interest won't soon decline. 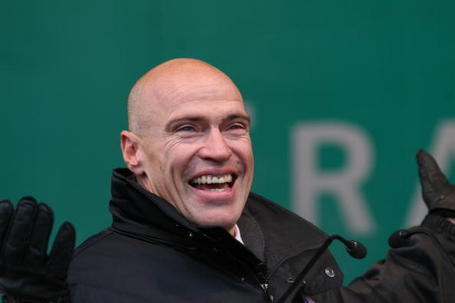 I'm Mark Messier.  In the sports world, I'm a whale. In the hockey world, I'm one of the biggest whales, especially since my good friend Wayne went off track in Phoenix.  I'm Edmonton-bred, born and raised, and I am Alberta's greatest hockey hero.  I won six stanley cups in my time in the NHL and became known as the game's greatest captain.  I once called my shot that I would deliver a Stanley Cup and I delivered a Stanley Cup.   When I was playing, I was bold and brash and had the game to back it up.  I was the biggest thing in hockey on the biggest stage in the world.  I'm beloved everywhere in North America, except Vancouver and Calgary.  I was a take-no-prisoners masher and I will be again.

My relationship with the Oilers has been good and the fans continue to love me.  I'd love to go back there, but given that my old buddy Kevin Lowe is already in charge of the entire franchise, I know that there's not enough room in Rexall Place for the both of us.  The only way that I'll ever make it back to Edmonton is if the Oilers were to let Kevin go, but he's got a job for life.

After basking in the glow of my great career that spanned three decades and cup wins in both Edmonton and New York, this year I decided that I wanted to enter hockey management.  I needed someone to give me an in so that I could join the closed ranks of NHL management, so I turned to an old friend, Glen Sather.  Glen gave me a job as a special assistant to the general manager.  I expect that Glen will show me the ropes in the NHL, give me the ins and outs of managing the business, hook me up with the secrets that he uses to run the Rangers and set me on my way.  I expect that one year in this role will give me the management resume I need to land a General Manager's job in the NHL..

To make sure that everyone is aware I'm available, I decided to take the job as General Manager of Team Canada's 2010 World Championship team.  Raising my profile with this job, combined with my job with the Rangers and my history of winning all but guarantees a job offer in the summer of 2010  I'll show that I'm able to work with talent and evaluate players for the team and I'll do some elbow-rubbing with those involved with Hockey Canada.  My name will light up news ledes and shine brightly on the marquee once again.  I only hope that it will shine brightly enough to attract the attention of a team or two.  I only need one interview to impress an owner, especially an owner that will be impressed by my celebrity.  Someone that would love to hire a whale.