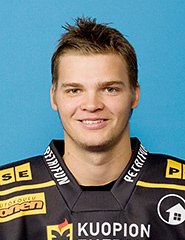 Over the weekend, I reported that Teemu Hartikainen's compulsory service had ended and he was playing with a renewed vigor.  The high level of play continued Tuesday against second-place HIFK, a game in which KalPa posted a shutout, 4-0, and, with a game in hand, drew to within four points of HIFK in the standings.
One of our Finnish readers emailed me to let me know that Hartikainen's performance lately hasn't been focused solely in the offensive end.  He's been playing a much more physical brand of hockey in both ends and hitting everything that moves.  His penalty killing work has been much more active and aggressive.

As far as the game goes, Sami Kapanen was out with a bad back, so Hartikainen was bumped up to the first line with Tommi Miettinen and Kalle Kerman.  Hartikainen responded with a beauty of a game - two assists, six shots and a plus two rating.

In the four games since his service ended, his stat line looks strong:

Watch the KalPa vs. HIFK highlights.