Is Rebuilding the Path to Success?

Share All sharing options for: Is Rebuilding the Path to Success?

For a good many of us who cheer for the Oilers the realization that the club is poor is beginning to set in. The shot differential has improved substantially since I looked at the worst outshooting teams since the lockout, but still sits at a lovely -5.5 per game. Should they finish the season with that total it would be the third worst since the lockout. To make matters worse, Ales Hemsky is now done for the year and there is some chance that Shawn Horcoff may be joining him. As for straight wins and losses the Oilers are now last in the Conference in points percentage and tied for last in wins even though they've played three more games at home than on the road to this point in the season. Yes, it's beginning to look a lot like a lottery club and should the Oilers finish in the bottom three in the NHL, it would be the first time it's happened in the Oilers' NHL history (as Oiler fans we don't have a lot of experience with top five picks and the little we have is better left forgotten). Dark days.

The bright side to all of this is that the team is likely bad enough that this season could well result in a top prospect joining the Oilers this Spring. Looking at some of the underperforming deals that run through next season there must be some temptation to just let the team suck for a couple more seasons. After all, look at what teams like Pittsburgh and Chicago have been able to do after tearing down and building back up. In addition, YKOil recently pointed out just how many Stanley Cup winners emerged from the ashes of a brutal team who got its choice of the young kids who come out to be harvested each Spring. So what of these tear-down rebuilds? Do most of them succeed in creating a great team like the Hawks or Pens that we see today? After the jump, I'll take a more detailed look.

I was discussing this question or rebuilds with Ender earlier this week and although we didn't agree on a whole lot, we did manage to agree that in order to determine whether or not most teams who rebuild are successful we need to define some pretty important terms, namely, what is a rebuild, when is it over and would does success look like). But before those questions can be answered we must first decide which seasons we're looking at. I decided to use only rebuilds that began in 1991 or later. I chose this date because it's the beginning of the expansion era which, I think, had a significant effect on the "win-now" vs. "rebuild" stances. As the NHL continued to expand, the dichotomy between "win-now" and "rebuild" became more and more stark. When there are only five teams missing the playoffs, you really can give your fans hope each year and if you miss the playoffs, there's a wonderful consolation. When fourteen teams miss the playoffs trying to do both may well result in a lot of 13th or 14th place finishes that don't yield a shiny new youngster or playoff hockey. It really is better to choose one.

The next pertinent issue to consider is what exactly is a full-on rebuild. I considered this to be any team that had two top five selections in two different seasons over a three season sample. One could use other defnitions, but this one gave me a good number of teams to look at (22 rebuilds have begun since 1991 by this definition) and included most of the teams I would consider to have been rebuilding. The first year of the rebuilding phase is, then, the first year the club has a top five pick. The team would then be in the rebuilding phase until they post two consecutive seasons where the team does not have a pick in the top ten of the draft. The first year out of the rebuilding phase would then be the first of those two seasons.

When deciding what to call success I would like to call it at least one appearance in the Conference Finals plus as many years in the playoffs as were taken up in the rebuild. Presumably the choices are "rebuild" or "win now." If the "win now" option is generally considered, at worst, a playoff bubble team (though there will be exceptions) I don’t think it’s fair to call a rebuild that yielded a playoff bubble team a success. There needs to be some high end results and some sustained success. I close the "post-build" period after the team in question has missed the playoffs twice.

So using those definitions and criteria for success, here are the results for the rebuilds since 1991: 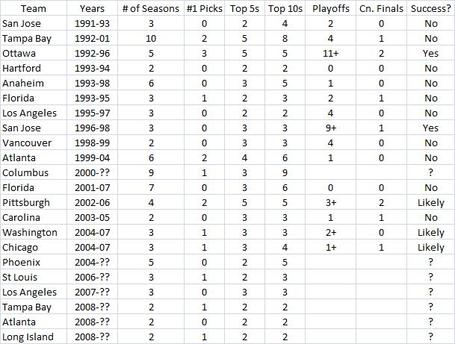 First of all, the little + symbol in the playoffs column means that the post-rebuild period isn't yet closed. The first thing I wanted to note is that rebuilds don't always lead to a great deal of success. There are just as many examples of teams who fail while rebuilding as there are examples of teams that succeed. Quite often a team goes through a period of being very bad only to end up mediocre. Rebuilding successfully isn't easy and shouldn't be treated as a slam dunk to get a better club. Rebuilding also takes time. The successful rebuilds were all three seasons or longer. You might argue Carolina's latest a success but, even though that group won the Stanley Cup, they really haven't had any sustain. In the more recent history rebuilds have tended to be more successful. Of the two that failed, one of them (Carolina) actually won the Stanley Cup in its only playoff appearance. This might mean that rebuilding from scratch is a better strategy in this CBA, or it might simply be that the drafts from 2002-07 had better top end talent than those that came before. It will be interesting to see if some of these other rebuilding groups end up having success comparable to that of the Hawks, Capitals and Penguins.

Bringing it back to the Oilers, I think they would do well to tear down and rebuild for at least the next two seaons. If they plan now to rebuild over a period of three seasons it gives them a lot of options. Suddenly value today is worth a lot less and value four or so years down the line. It's an important decision and one that the Oilers need to make in earnest before the trade deadline of this season and, one would hope, even sooner.