Share All sharing options for: Toni Rajala Talks to The Copper & Blue 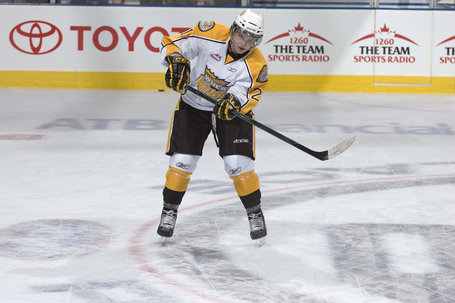 The Copper & Blue continue the Finnish experience with an interview with Toni Rajala, Edmonton's 4th round choice (#101) in the 2009 draft.  Rajala was rated a top 30 talent in the draft, but slipped due to size concerns.  Rajala put on a show at the 2009 World U18 Championships, leading the tournament with 19 points, breaking Alex Ovechkin's record and he was named the most outstanding forward in the tournament.  He was felled with a knee injury in August at a U20 event, an injury that was blown out of proportion by some in the Edmonton media. He rehabbed in time to make the jump to the WHL, playing for the Brandon Wheat Kings this year, rather than staying in Finland.

Rajala has spent the season on either Scott Glennie or Brayden Schenn's wing, paired with Matt Calvert to form the Wheat Kings' top line.  I got the chance to speak to Toni recently and ask him about his international play and his transition to North America.

I owe a big thanks to Matt McNish of the Brandon Wheat Kings for arranging my time with Toni.

The Copper & Blue:  I guess the first question I have to ask is how is the knee?

Toni Rajala:  The knee is very good. I've played twelve games and I've got no problems with it. I'm very happy with it now.

C & B:  What was your reaction to being drafted by the Oilers?  I'm sure that you're aware of the Finnish connection there.

Rajala:  It was very nice. I was happy because I know that Edmonton is a big hockey town. I also know that there are many great Finns that have played in Edmonton.  I was happy when they drafted me.

C & B:  What has the transition to North America been like for you?

Rajala: Brandon is a nice place to be, it's a very nice city and my teammates are really great guys. It's been easy to make this transition.

C & B:  What about the transition to the North American game?

Rajala: The game here is faster and there is more hitting than in Finland. The play is tougher, and since the rinks are much smaller, you have to make your moves faster than you would in Finland.  I enjoy the style of play here.

C & B:  Have you had to change your game to play in the WHL?

Rajala: I play the game I know how to play. I'm fast, and because of that I'm able to use my speed and skill to my advantage. I'm playing the same game that I've always played.

C & B:  Are you going to have to change anything in your game to be successful at this level?

Rajala: The players are stronger at this level and I have to get stronger to play with them. That's my biggest weakness right now, my strength.  I'm working on that.

C & B:  Have you altered your workout routine to build more strength?

C & B:  You've got thirteen points in your first twelve games - is that a pace you can maintain?

Rajala:  Yes, I think so. The first seven games were very difficult for me because the last time I played in a game was April at the World Juniors. Since then, it's been easier and I'm getting better with each game.

[Note:  Rajala didn't suit up for the Wheat Kings for any of the first seven games]

C & B:  What's the oulook for Brandon this season?

Rajala:  We have a really great team, and I have great teammates.  In May, I think we have a good chance to win the Memorial Cup.

C & B:  You seem to excel in international play. You had big tournaments in the 2008 and 2009 under 18 world championships. What have those experiences meant to you?

Rajala:  Ah, those have been very good experiences for me, especially when we won the bronze at the under 18 tournament.  Even the under 20 tournament was a good experience. I love to play international games - I get excited every time I pull on the Finnish sweater.

C & B:  Speaking of Finns, I interviewed Teemu Hartikainen recently. Tell me about him.

Rajala:  I know him very well, I've played with him.  He's a power forward. He's a very strong player with good skills and he's a goal-scorer. Off the ice, he's a nice guy. He's very funny, great guy.

C & B:  Were you excited to be drafted by a team that had a Finn, especially a guy you know well, in the system already?

Rajala:  Oh yes.  The Finns are in Edmonton again.

C & B:  Do you plan on playing the upcoming world juniors tournament?

Rajala:  It's very close by, here in Saskatoon, and I think I will play.  I plan to play, at least.

C & B:  Thank you very much for your time. Best of luck to you the rest of the season.

Rajala:  Thank you very much.

The Wheat Kings were kind enough to send some photos of Toni in action this season.  You can view them here, in the Toni Rajala gallery FanPost.

Catch some footage of Rajala on NHL TV