The Art Of The Deal, Lessons for Kevin Lowe

Share All sharing options for: The Art Of The Deal, Lessons for Kevin Lowe 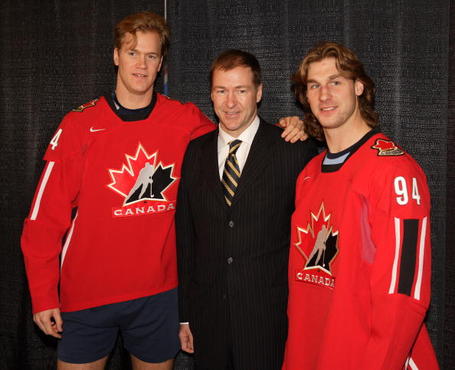 On June 29th, 2008, Kevin Lowe sent Jarret Stoll and Matt Greene to Los Angeles for Lubomir Visnovsky.  It was a trade that Lowe won hands-down.  In the time before and the time since, it's been so rare that Edmonton wins a deal that some people are already starting to forget -- January 26th, 2006.  On that day, Kevin Lowe was on top of his game, sending Jani Rita and Cory Cross to Pittsburgh for Dick Tarnstrom.  He landed Jaroslav Spacek for the low, low price of Tony Salmelainen.  The day was a coup for the Oilers and at the time was a continuation of Lowe's personnel mastery.  To begin that same season, on August 3rd, 2005, Kevin Lowe fleeced a desperate Larry Pleau and sent out Eric Brewer, Jeff Woywitka and Doug Lynch and brought Chris Pronger to Alberta.  Lowe also won another deal that day, though it's not mentioned as often, sending Mike York and a conditional pick to the Islanders for Michael Peca.

Lowe has also struggled in free agency negotiations.  Since the Edmonton trip to the Stanley Cup Finals, he's overpaid the people willing to sign with the Oilers.  Those who weren't willing have been chased all over the continent by Lowe and his bags of money.  Fernando Pisani landed a $2.5 million per year deal following his career-best performance in the playoffs.  Ethan Moreau, a third line grinder when on his game, landed a four year contract worth $2 million per year in the months following the cup run.  Steve Staios, 33 at the time, signed a four year contract for $2.7 million per year shortly thereafter.  Lowe dropped $7.2 million per year on three players, all on the wrong side of 30, all coming off career-best performances.  He was worse in the unrestricted market, though.

Like a drunken sailor in port, Kevin Lowe spends the off-season looking for ways to hang cap-killing, long-term contracts on the Oilers.  He unsuccessfully offered Marian Hossa $90 million dollars over 10 years.  He unsuccessfully courted Jaromir Jagr with a rumored offer of $7 million per year.  He successfully landed Sheldon Souray for $5.4 million a year over five years - during a negotiation in which he was the only person bidding on Souray's services.  He offered Dustin Penner, Andrew Cogliano and Ladislav Smid for Dany Heatley, and then flew all over western Canada and went to Heatley, prostrate, to beg him to play for the Oilers.

Since the end of the Cup finals, Lowe has won a single deal - the Visnovsky trade.

What Lowe is unable to do is, as Michael advises above, walk away.  In the midst of a negotiation, the best negotiators set a walk-away point before talks even begin and adjust that walk-away point as the back-and-forth moves along.  The best negotiators can walk away well before that point is hit if they feel they can get the upper hand in the negotiations.  They are able to strong-arm those who are afraid they aren't getting a good deal, and they are able to scare those that are afraid of missing out completely.  Kevin Lowe falls into the last category.  He's so afraid of coming away empty-handed that he's willing to jump at the first deal that comes his way, and he's willing to overpay his targets just to make sure that he doesn't miss out.

Lowe would do well by eliminating himself from the negotiating process altogether.  He should surround himself with a shrewd negotiator or two and let them do the dirty work.  Let them take the blame if the process goes bad.  If he's unable to do so, the best thing that Kevin Lowe could do is to simply walk away from the table once.  Let the deal die.  Gain the upper-hand on a guy that is afraid of missing out.  It would be both a learning and cathartic experience for the guy that famously asked "Is it me?" in a press conference.  Even if it's a 50-50 chance that Lowe ends up with nothing, 50% of a winning deal is better than he's been able to do in the last three-and-a-half years.