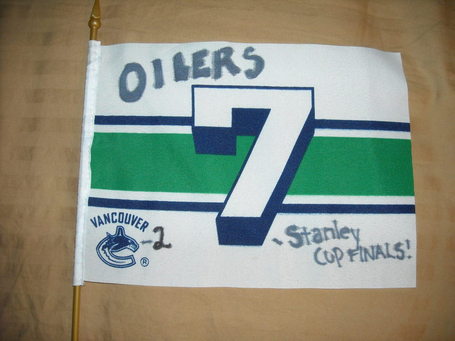 The story after the jump.

Most of you (all of you?) don't know that my girlfriend is both an amazing girlfriend, an Oiler fan and a wonderful artist. Just over a year ago we'd recently moved to Vancouver and didn't know too many folks so she decided to buy us tickets to see the Canucks and Oilers for my birthday. What a great gift. The Oilers proceeded to celebrate my birthday in style with a 6-3 loss. Thanks guys.

So what's the deal with this flag? Well, when we arrived at GM Place we found these ridiculous mini-flags sitting on all of our seats. They sucked and we had no idea what was going on. Did Trevor Linden wear the number seven on his underwear? Is Cliff Ronning suddenly the kind of player who gets a jersey retired? Well Cliff Ronning was there but... well, let's let this... uh... "fantastic" ceremony speak for itself. It turns out they were retiring the fans. Oh. My. God.

Well, this just wouldn't do. Fortunately my girlfriend brought markers with her to the game and we were early enough that she had plenty of time to improve what Canucks' management had done. She was even kind enough to make a few for some of the other Oiler fans in our section. We waved our flags happily as we cheered for the Oilers and what were fans of the Canucks to say? They weren't impressed with us for sure, and made that clear but in the end saying, "Cliff Ronning retired US! You can't make fun of THIS!" just isn't going to work. The promotion lasted about two or three games before the Canucks realized that the whole thing was extremely embarrassing to their fans and they shelved the promotion, although the number seven is still in the rafters of GM Place celebrating the fact that the Canucks have very little to celebrate. Nice work guys. So tonight, as we look at a present that's nothing but bleak and a future one might describe as uncertain if one is optimistic, let's take a moment to remember our past and smile. At least we'll never need to retire the fans. GOILERS!