Faceoffs are reasonably important.  Especially faceoffs in the offensive or defensive zone where puck possession leads more directly to success.  Gabe Desjardins has demonstrated the impact of the outcome of a faceoff at even strength.  No doubt there would be similar results if one looked at the outcome of faceoffs on special teams.  I bring this up because the Edmonton Oilers are not very good in the faceoff circle and have recently taken to using options like Patrick O'Sullivan and Dustin Penner in order to compensate for an injured Shawn Horcoff, ineffective Andrew Cogliano and "signed-to-play-wing" Mike Comrie.  I wanted to look at what their track record might tell us about what we should expect from them going forward.  In order to do that, however, I wanted to first look at the difference between faceoff success on the power play, on the penalty kill and at even strength.

More after the jump...

First, I need to acknowledge that Tyler Dellow has already given us some data that shows teams and players have a much better faceoff percentage on the power play than they do when short-handed.  It seems obvious, but isn't always something we think of when we talk about a particular player's faceoff percentage.  I decided to put together a couple of charts illustrating this point.  The first is a chart of players that took more than 200 faceoffs while short-handed last in both 2008-09 and 2007-08: 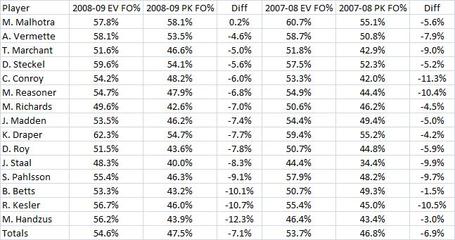 The final "totals" column is just adding all of the faceoff performances together so those that took more faceoffs contribute more to the average.  That means that the players who took the most faceoffs over the last two years on the penalty kill ended up losing a significant portion of their success.  Although for some players there are some pretty big jumps from year to year, in absolute terms, the guys who did the best at even strength also tend to do the best short-handed. 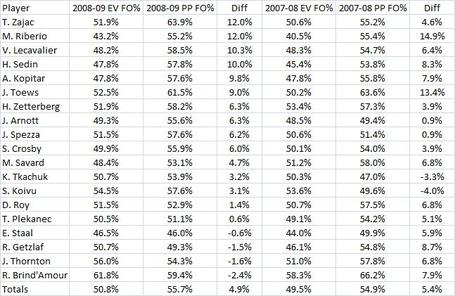 I think there are some pretty interesting things here.  The guys taking the most faceoffs on the penalty kill are generally what we might call "specialists."  Teams really don't want to lose draws when they're penalty killing and make it a priority.  On the power play, faceoff ability takes a backseat to offensive ability in general.  The only player you might regard as a specialist who makes the list is Rod Brind'Amour who, in his best year, won two thirds of his faceoffs on the power play.  This will generally serve to drag down the numbers of the specialists and pump up the numbers for the stars. Again, there isn't a lot of consistency at the player level from year to year but the totals stay very similar.

So, back to the Oilers, when deciding which guys should be taking draws I think it's probably wise to just look at even strength numbers.  For instance, Dustin Penner's faceoff percentage in 2007-08 was 55.0% in 189 faceoffs but in the 93 faceoffs he took at even strength he only won 40.8%.  Here are the career numbers at even strength for all of the Oilers who have taken 50 or more faceoffs this season, adding in Marc Pouliot and subtracting Shawn Horcoff:

It's not the prettiest of charts.  There are only two guys on the team who have cleared 43% for their career and, at least so far, Dustin Penner and Patrick O'Sullivan aren't good options on the dot.  Sam Gagner has improved a lot so far this year (100 wins and 103 losses) and could be a decent option going forward but with Horcoff not taking draws the Oilers could really use some help in this area.  For most clubs faceoffs aren't a big deal because the pack is bunched so close together but the Oilers are bad enough territorially and bad enough at faceoffs that it could well be hurting them.  It would obviously be preferable to improve the territorial play but it's probably significantly easier to improve the faceoff situation.

And poor Marc Pouliot.  Gilbert Brule hasn't been used at all on the PK so when Pouliot gets back he's likely going to immediately step into some pretty tough minutes (defensive zone draws and lots of PK).  It's a virtual guarantee his counting numbers are going to be awful as he heads for restricted free agency.  Good luck getting paid kid!