Share All sharing options for: DD or JDD? Doppelgänger Dilemma

Lowetide asked me an interesting question the other day: if I were building an expansion team, which one of Edmonton's young goalies might I pick: Deslauriers or Dubnyk? Let's rephrase it slightly to put an Oilers spin on the query: if there were an imaginary expansion draft, which one should we protect?

While there's hopefully no expansion to worry about, the Oilers will essentially face such a choice next summer/fall, or pay a premium to put it off. For now there is no hard overlap between the two, but that day is coming fast. Dubnyk is two years younger than Deslauriers and pretty much Exactly two years behind him on the career curve. In fact the two have a whole lot in common:

Jeff Drouin-Deslauriers (JDD) was born on May 15, 1984, the day of Game 3 of the Stanley Cup Finals (Oilers 7, Islanders 2 :)). A long stringbean at 6'4, 200, he was drafted 31st overall in 2002, the first pick of the second round, acquired in the Jochen Hecht trade. (Pick #36, Jarret Stoll, also came courtesy of what turned out to be a pretty good trade.) He was the fourth goalie of his draft class to be chosen. The top 5 were #2 Kari Lehtonen, #25 Cam Ward, #29 Hannu Toivunen, #31 JDD, #34 Tobias Stephen. JDD appears to be a solid third in this group, behind Ward and the injury-plagued Lehtonen but ahead of the other two who fired and fell back. 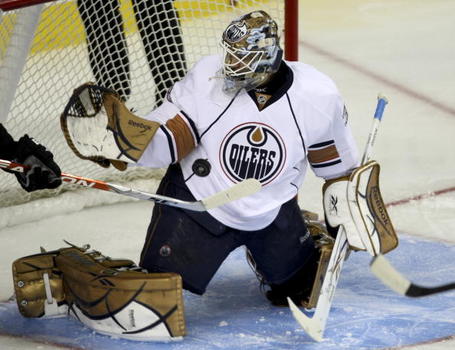 on May 4, 1986, when the hockey world was still trying to come to grips with Steve Smith's own goal. A longer stringbean at 6''5, 194, he was drafted 14th overall in 2004. He was the second goalie of his draft class to be chosen. The top 5 were #6 Al Montoya, #14 DD, #17 Marek Schwarz, #26 Cory Schneider, #37 David Shantz. A much less proven fivesome, befitting their younger age. Dubnyk is the fourth to get a cup o' coffee, but none have played as many as 500 minutes in the show. DD clearly ranks ahead of Schwarz and Shantz, and it's a toss-up among the others, with Schneider having the best hype. That said, today DD is the only one of the five in the NHL.

At a glance DD and JDD are mirror images of each other with Dubnyk being the longer, stringbeanier, right-handed one with the slightly higher draft pedigree and the slightly less-bumpy career curve.

Both broke into major junior in 2001-02 so let's start there after the jump:

Dubnyk was the hotter shot, played in the Dub as a call-up at age 15 and a backup at 16. By 17, however, both were starters (44+ GP) in Major Junior. So let's reorganize our data there, recognize that Dubnyk is two years (less 11 days) younger, and match up their seasons by hockey age.

There are a lot more similarities than differences on those career curves. Thanks to the Oilers' inexplicable decision to suspend AHL operations for two seasons, JDD's development was more retarded -- using the word carefully -- than was DD's. Deslauriers was on the outside looking in especially in his 21-year-old season, whereas Dubnyk was still in junior that 2005-06 season, then got an everyday gig in the ECHL the next year which didn't hurt him a bit. By his own 21-year-old season he was backing up JDD in Springfield, and getting a reasonable split (37%) of the ice time, over which the Oilers had finally regained control. As a result DD has substantially more games in the lower league, all in one season, whereas JDD spent parts of two seasons in the ECHL and spent a little more time on the bench at whatever level. Thus even though Dubnyk has just begun his 23-year-old season, his pro experience is already a little greater than JDD's was at the end of his equivalent season. To summarize:

So Dubnyk appears to have a slight edge, with a little more experience at both levels and a slightly greater Sv%. While far from perfect, Sv% is the best single measure we have of goaltender performance. It seems probable that quality of team will affect that Sv%. The two only played on the same team for one full season (2007-08 in Springfield) and little pieces of a couple of others. JDD has the better Pts% ("winning percentage") of the two, .511 to .475 in their last 3 years of junior, .507 to .447 in their first 4 years of pro. Some would argue that JDD is therefore more of a winner; others would counter that DD played on worse teams and if anything that makes his superior Sv% that much more impressive.

Beyond that are the non-save effects, the "soft skills" which are so difficult to measure. I’m talking about game management skills, rebound control, puck retrieval and distribution. At the NHL level I estimate these skills or lack thereof might be the equivalent of a bump in a goalie’s Sv% by as much as ± .005.  I’ve seen enough of JDD to lump him in the group I call "chaos goalies"; he better be a good stopper, cuz a sweeper he is not. We know less about this aspect of DD's game; what do the scouting reports say? If he’s a "control goalie" that’s another arrow in his quiver; if on the other hand he’s much worse than JDD, he won’t be able to play in this league.

For now Dubnyk faces two realities. He may be a little further than Deslauriers at the same point in his career, but in real time he’s two years behind. JDD has the 16 games of NHL experience, and the 90 games on the bench and all that accrues to that; he’s the NHLer. DD is where JDD was two years ago, called up for a cup of coffee but not guaranteed to even get a game. Last night we saw the two together in the NHL line-up for the first time, but come game time JDD responded to the challenge in a big way, posting a 36-save shutout. He wants to keep Dubnyk on the bench. (That said, if Khabibulin needs a few more days I personally would like to see the two split the upcoming back-to-back games.)

The other reality is that the club has committed to Nikolai Khabibulin who theoretically will be the starting goalie for the next 2.7 ± 1 years. If the idea – or should I say the ideal – is to gradually grow a youngster into the starting role à la Warren Moon and Tom Wilkinson, the timing may actually work in Dubnyk’s favour.  JDD will enter his UFA years in 2011; Dubnyk is eligible to do so in 2013, just as Khabibulin’s hefty pact expires. If Dubnyk blossoms, the Oilers will be in position to pay him then.

Still, there’s precious little to choose between the two long stringbeans. By next fall Dubnyk will be in the exact same position that JDD was last year, out of options and needing to clear waivers. In JDD’s case we saw the undesirable result: a three-headed monster in the crease and a lack of roster flexibility elsewhere. As things shape up now, Oilers will face the exact same situation next fall.