The best thing about the work that Dennis King (and now others) is doing on scoring chances is that we're beginning to get some data to work with.  His work with the Oilers numbers last year was excellent, but limited.  Now that we've got a second season to work with, we can start to do some analysis on these datasets.

Knowing that the rest of the Northwest is being tracked this year is exciting because we'll be able to do some intra-divisional comparisons.  I've decided to take a look at the Oilers at the quarter pole this year and compare those numbers to the total chances from last year.  Things look bleak, especially for the veterans on this club.  Shawn Horcoff, Fernando Pisani, Steve Staios, Jason Strudwick, and especially Ethan Moreau look incomparably bad by this metric.  Even though there has been hand-wringing over the amount of kids on the team (including some by me), there are some kids that are doing much better than I thought. 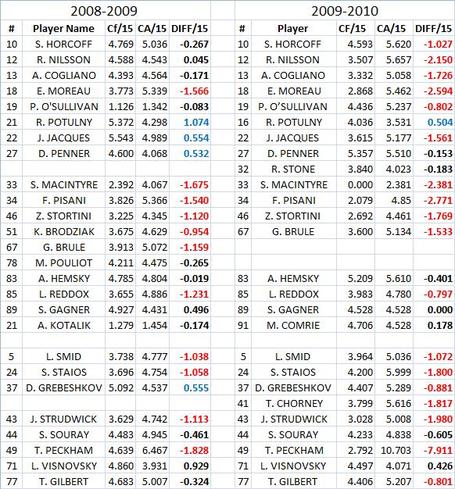 The above chart compares those scoring chances by player.  I've compared Gilbert Brule to Kyle Brodziak because he's been given pretty much the same job that the departed Brodziak had at even strength last year.  I've also compared Ales Kotalik to Mike Comrie as they've had similar jobs at even strength.

There is some interesting stuff going on here.  The chart shows 24 comparable players and 17 of them have a lower chances for per 15 value.  19 of them have a higher chances against value.  We can safely say that this team is worse at evens this year.  No doubt the injuries and flu have something to do with this, but it should be noted that the team is bleeding at evens this year.

Brule is not handling the role as well as Brodziak did.  In fact, he's giving up a half of a chance more per 15 than Brodziak did - if he gets similar time on ice, that amounts to three extra goals against this year.  Prior to his injury, Ryan Stone was doing just fine - it will be interesting to see how Quinn handles him when he's healthy again.

Horcoff's play has been brutal by these numbers - he's off a full chance per 15 minutes.  That's an extra eight goals against at even strength this year.  Moreau is off by the same amount, but he is now surrendering 2.594 chances per 15 more than he's creating, easily the worst among regulars on the team and given his performance last year, is a signal that he may be done.

By far, the biggest falloff this year has been by Andrew Cogliano, as he has seen his differential slip by over 1.5 chances / 15 this year, to -1.726.

For all of the accolades that Ladislav Smid has received, those accolades don't mean much in this case.  His chances differential is the same as it was last year.  I have a hunch that if his chances were broken out between his time spent paired with Lubomir Visnovsky and time without, you'd see a rate that was one of the best on the team with Visnovsky and one of the worst without Visnovsky.

Lastly, I don't believe that Theo Peckham is, or was, healthy, at least during his callup this year. The foot must still be bothering him as he was just abysmal by this metric.

Author's note:  Vic has determined that the goal / scoring chance rate is 1/7 in his findings thus far.  All GF/GA math in this post is based on that.