A Look at Win-Loss Records After 15 Games

Share All sharing options for: A Look at Win-Loss Records After 15 Games

Every year there are teams that slump through the first fifteen games of the season and there are teams that jump out to fantastic records.  Sometimes, as in the case of this year's Penguins, this is no surprise and it's seen as a reflection of the fact that Pittsburgh is a talented team.  Other times, as in the case of this year's Avalanche, the quick start comes as a surprise and many observers are reluctant to believe that their strong record will persist.  I decided to take a look at the first fifteen games for every team since the lockout and see how much their record changes from the first fifteen games to the end of the season.  We'll look at the results after the jump.

Looking at every season since the lockout gives us 120 completed seasons.  In 79 of those 120 seasons the points percentage saw reasonably big swings by the end of the year (a change in points percentage of greater than 5.00% i.e. a team with a points percentage of 55% over the first 15 games ending up with something lower than 50% or greater than 60%). There's still plenty of time for the standings to change between now and the end of the year.  That said, the data also offers us some rough guidelines in terms of where most teams finish depending on how many points they had in the first 15 games, as illustrated by the following chart (which you'll probably want to click to enlarge):

No team since the lockout has made the playoffs after earning 12 or fewer points in the first 15 games of the season.  In fact, only 2 of the 14 teams have gone on to post 82 points or more.  This year that's bad news for Minnesota, Carolina and Florida and extremely bad news for the Toronto Maple Leafs.  This data implies that it's very likely Boston will be picking in the top ten with the pick they acquired in the Phil Kessel trade.  Kessel himself was chosen 5th overall so that doesn't automatically make the swap a loss.  That depends a whole lot more on how Kessel actually plays.  Nonetheless, it probably wasn't what Brian Burke had in mind.

On the other side of the coin, only one team since the lockout has missed the playoffs after registering more than 22 points in their first 15 games of the season, the 2005-06 Montreal Canadiens (Note: Originally I had erroneously written that no team had missed the playoffs with more than 22 points in their 15 games.  Thanks to reader Doogie2K who pointed out this error).  That's particularly good news for the Penguins, Devils and Avalanche who are off to a great start.  Of those three I'd give the Avalanche the best chance at falling apart.

The worst point total after 15 games?  It's a tie between the 2005-06 Blues, the 2006-07 Flyers and now the 2009-10 Carolina Hurricanes.  Each team managed 7 points.  Besides the 2005-06 Canadiens (again, thanks to Doogie2K) which team had the most points and still missed the playoffs?  The 2008-09 Sabres and Wild couldn't turn a 21-point start into a playoff berth (both teams were 10-4-1).  It was the same story for the 2007-08 Hurricanes and the 2005-06 Canucks (a special thanks to Vancouver for that collapse!) (I probably should have just edited out that whole question and answer but I thought taking out the Canucks shot would be criminal) .

The best point total after 15 games?  The 2006-07 Buffalo Sabres put up 27 points, as did the 2007-08 Detroit Red Wings.  Both teams regressed somewhat but still won their respective Conference championships and both teams went all the way to the Conference Finals.  In fact, of the 8 teams that made at least 24 points, 3 were eliminated in the first round, 1 made it to the Conference Finals, 1 made it to the Stanley Cup Finals and 3 won the Stanley Cup. The only team with that many points this year is the Pittsburgh Penguins.  Which team had the least points and still managed a run to the playoffs?  The 2008-09 Blues, the 2007-08 Capitals, the 2007-08 Ducks and the 2006-07 Senators all manged to get in while only making 13 points in their first 15 games.  The Senators and Ducks both managed 100 point seasons!

I guess I'll end this data dump by posting the standings after 15 games for each team so you can see where your team fits in.  I know my team will be trying to break their own record for "worst team since the lockout to start with 15 points."  Yeah Oilers! 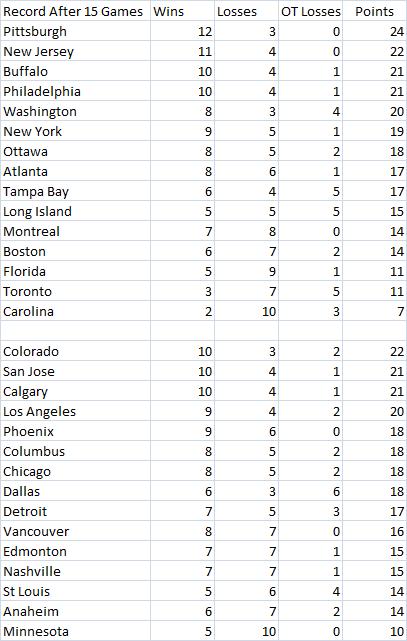