Share All sharing options for: Philippe Cornet Talks to The Copper & Blue

The Copper & Blue's series of interviews with the next generation of Oilers continues.   Today's subject is Philiippe Cornet, drafted in the fifth round, 133rd overall, by the Edmonton Oilers in the 2008 NHL Entry Draft.  Cornet was a little-known forward playing for the Rimouski Oceanic when he was drafted and has rocketed up the team's prospect charts since then.  His breakout season came two years ago when he posted 23 goals and 26 assists in 61 games.  After being drafted he posted 29 goals and 48 assists in 63 games last year to lead Rimouski in scoring.  He did so on a team with 8 other NHL draft picks, including two first round picks.  This year, after being traded to Rouyn, he's scoring well over a point per game and is being relied upon as the go to guy and primary playmaker on the team.

Cornet is listed at 6' 0", 173 lbs but continues to fill out his frame.  He impressed many observers at training camp this year with his playmaking ability and nose for the puck.  He'll head to the AHL next year as one of those under-the-radar forwards that could make an impact.  I recently had the chance to ask Philippe about his rise up the charts.

Thanks to Mélanie Allard of the Rouyn-Noranda Huskies, who was instrumental in making this interview happen.

The Copper & Blue:What was your reaction to being traded from Rimouski to Rouyn?

Philippe Cornet: When I was traded to Rouyn, I wasn't very surprised about it.  There had been a lot of rumors since last Christmas about sending me to Rouyn so I knew I was probably leaving Rimouski.

[On June 6th, at the QMJHL Entry Draft, Rimouski sent Philippe Cornet and Tommy Perreault to Rouyn-Noranda for Alex Émond  and Étienne Boutet and a number of draft picks.]

C & B: How has the season gone thus far?

Cornet: This season is going well for now. It can be better but I'm working hard every game to help the team the best that I can.

C & B: What position are you playing for Rouyn?

C & B: You are being counted on to score with your new team - do you approach the game differently because of that?

Cornet: No, not really. I approach the game the same way as I did before. I'm able to create many scoring chances and its up to me to capitalize on them.

Cornet: I guess. I thought my first camp went really well, but this year's camp was again better. I opened some eyes, I think.  Maybe people that didn't know who I was before know now!

C & B: You saw that you could compete at a high level in camp. In your mind, which area of your game needs to improve?

Cornet: I have to improve my defensive play and work on my skating. I also continue to work on my strength.

C & B: There have been questions about your skating - that it could be one thing that holds you back - has your skating improved?

Cornet: Yes, I improved on that aspect. When I was sent out from camp, the staff talked to me about it and told me that I was better.

C & B: Now that you've been through a camp with the other Oiler prospects, who has really impressed you or stood out in the time you've played with or against them?

Cornet: Jordan Eberle. I had already played with him in summer under 18 but at this year's camp we kind of got along very well on the ice. He impressed me because he was dominant next to the other players.

C & B: Will you be a scorer or a playmaker at the next level?

Cornet: I see myself more as a playmaker than a scorer but I can do a bit of both.

C & B: Will you be in Springfield next year?

C & B: Finally, the big internet debate must be settled - is your last name pronounced Cor-NAY or Cor-net?

Cornet: This is a good one but it is Cor-net.

C & B: Thank you for your time. Good luck this season.

Thanks to Mélanie Allard for forwarding along the excellent pictures of Philippe Cornet in action.  All photos by Jean Lapointe. 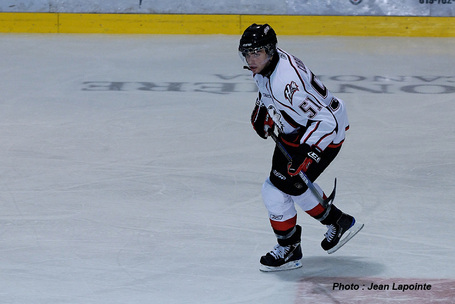