Russ, go get the hammer.

On Father's Day, I give thanks.

Share All sharing options for: Russ, go get the hammer. 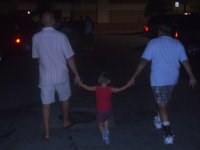 Doesn't seem like much, but it's so fitting. The man has been through it all with me and has been the best thing that a son could hope for. He's been a teacher, a coach, a mentor, an advisor, a drinking buddy, a golf partner, a debate opponent, and a best friend -- you know, a dad. He did it all while working way too may hours, but still having all of the time that I could ask for. I have no idea how he did it - he had to spend about 15 years of his life completely exhausted.

He's been bedside for catastrophic injuries and hospital stays, he's been there for my greatest accomplishments to give me a slap on the back, and he's been there for my greatest defeats to give consolation and a word of encouragement. I was a hard-headed and stubborn kid and he let me learn my lessons the hard way - though he told me I was going to do so well before I did. And he was right. And he was patient. Even when we locked horns, he was patient. Out-of-this-world patient.

Now that I'm a dad, I find myself thinking things that dad told me I would think. And I find myself trying to be the dad he was, though I struggle, because I don't possess the same patience he did. I try, every day I try. I remind myself to be patient. I see him teaching the same lessons to his grandchildren and smile knowing that my son gets to learn the same way I did.

He taught me the greatest lessons of life by example. Don't sweat the small stuff. Always buy the first round, and every subsequent round if necessary. Never itemize a check or a tab when it comes, it will all work out in the end -- if it doesn't, it doesn't matter. This too will pass. Appreciate today.

Thanks Dad. Love Ya.