Last of the Neanderthals

Share All sharing options for: Last of the Neanderthals

The ball players you loved as a kid are gone
They've been replaced by steroid fed neanderthals
Shattered, Shattered, when people aren't always what they seem
--Dropkick Murphys, Shattered 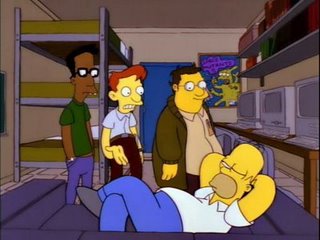 It seems the Oilers were committed to developing an intelligent organization. Now that another man in is charge of personnel, who knows if this will remain the case. Steve Tambellini is, however, left with the task of trying to meld old-school "work harder" players with the braniacs brought into the system over the last few years. Brawn versus intellect, the toilers versus intelligentsia, the proletariat versus the bourgeoisie, if you will. Of course, anyone holding the the opposite point-of-view would say it's melding the hard-working versus the lazy, the motivated versus the entitled.

A social split along class lines is inevitable in any grouping of people -- it's part of the human condition. It's no great stretch to assume that a similar fracture occurred in the Oilers locker room. Reports throughout the year talked about a locker room split, beginning with the now-notorious quote from a veteran which, incidentally, led to one of the best posts in hockey forum history by slipper. After that quote, it seemed that all of the knowing reporters now felt the dam was broken and they were free to talk about it. Even the beat guys began discussing the fracture. It was pegged as old versus young, or MacTavish versus young, veterans versus young, and even MacTavish loyalists versus young, but in all cases, the youth of the hockey club was playing the interloper.

Was it just a bunch of damned whippersnappers that wouldn't get off of the old guys' lawns? Or was there something deeper going on in that locker room? Remember, it's the youth on this team that is the leading edge of the intelligence drafted by Kevin Lowe. The locker room was slowly filled with some really bright young kids in Tom Gilbert, Sam Gagner, Andrew Cogliano, and Dustin Penner and if we are to believe a wave of media reports, that locker room suddenly shattered. There's a possibility that something more is at work - anti-intellectualism from some subset of players that were "not the youth". It's entirely believable that Ethan Moreau would be the leader of the such movement within the club. Ethan has never been mistaken with Alexander Graham Bell or Enrico Fermi and it was Ethan blaming the power play and the goal-scoring in post-game interviews. Never a word about the second-worst penalty kill in the league, no, it was those damned kids that couldn't score goals. Surrounded by a bunch of smart and smart-assed kids, an enormous change from his known environment, he told them that they were doing it wrong and was rebuffed. He looked around the locker room and realized that he was the last of the neanderthals and began a campaign to assert his version of locker room chemistry. At that point the locker room was split - pick a social strata and see what happens in the room.

"Marge, try to understand. There are two kinds of college students -- jocks and nerds. As a jock, it is my duty to give nerds a hard time!